Why we must make the heat transition a success – and how 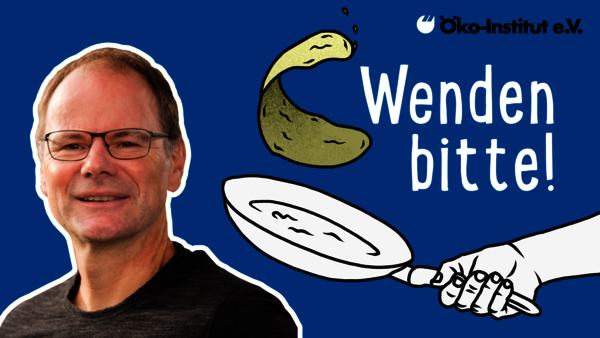 17 million central heating and self-contained heating systems are currently burning up oil and gas to heat Germany’s 19 million residential buildings. These will have to be replaced with more environmentally friendly heat sources, and the building envelopes refurbished to make them more energy-efficient. “Only then can the buildings sector achieve the targets of Germany’s Climate Change Act,” says Dr Veit Bürger in the Oeko-Institut’s latest podcast. The key technologies of the heat transition are electric heat pumps and climate-friendly district heating. “Biomass, on the other hand, should only be used for heating in buildings where a heat pump can’t be installed and which can’t be connected to district heating,” according to Bürger. “The top priority for the heat transition is of course efficiency, which is about reducing the demand for heat.”

Dr Veit Bürger talks about the technical and individual options for cutting emissions when heating buildings, as well as the political levers for making this happen, in the podcast “Wie gelingt die Wärmewende?” – “How will we make the heat transition a success?”.

To the podcast “Wie gelingt die Wärmewende?” – “How will we make the heat transition a success?” by the Oeko-Institut (in German)

The podcast audio is in German; an English translation of the exchange is here.

For example, by lowering the indoor temperature by one degree, households can make around five- to six-per-cent energy savings. Bürger also advises both individual property owners and owners’ associations to think ahead and plan what to install when the old heating system breaks down: “If the existing gas or oil boiler is 20 years old, then it won’t last for ever. It’s always good to have a plan up your sleeve. And it’s even better to replace the heating system beforehand,” Bürger recommends.

Politically, the heat transition is already public policy: the German government’s Climate Change Act requires the buildings sector to reduce its emissions by around 40 per cent in the next eight years. The new government is also paying great attention to the heat transition: “The coalition agreement and the resolutions based on it so far have huge potential to take the heat transition forward appreciably,” says Bürger. However, as he also mentions, this assumes that the proposed laws are fleshed out in such a way that they can achieve their full effect.

65 per cent requirement would be effective

In the regulatory policy context, a “65 per cent requirement” is currently being debated. This stipulates that from 1 January 2024 every replacement heating system must run on at least 65 per cent renewable heat: supplied by heat pumps or climate-friendly district heating, for example. “It would be a very efficacious instrument, because then simply replacing an old gas boiler with a new gas boiler will no longer be possible,” says Bürger.

Other instruments that he ranks as very important are municipal climate planning and minimum efficiency standards. Bürger adds that policymakers need to do more about the shortage of skilled workers to ensure that the heat transition can be implemented quickly enough in practice. He also goes into detail about funding programmes for energy-efficiency refurbishments and climate-friendly new builds.

Knowledge rather than everyday advice

The Oeko-Institut’s German-language podcast “Wenden bitte!” – “All change please!” is aimed at listeners from politics, science, the media, NGOs and the general public – anyone with an interest in political and environmental issues. Co-presenters of the podcast are Nadine Kreutzer, journalist and presenter, and Mandy Schossig, Head of Public Relations & Communications at the Oeko-Institut. For about an hour – enough time for the “long haul of environmental podcasts” – they talk with one of the Oeko-Institut’s experts about upcoming transformations towards sustainability.

Episode 7: “Wie gelingt die Wärmewende?” – “How will we make the heat transition a success?” with Dr Veit Bürger, released 22 September 2022

Episode 3: “Was bringt die Bürgerbeteiligung bei der Endlagersuche?” – “What use is public participation in the search for a final nuclear repository?” with Julia Mareike Neles, released 1 July 2021

Episode 4: “Wie verlängern wir das Leben unserer Elektrogeräte?” – “How can we prolong the life of our electrical equipment?” with Siddharth Prakash, released 5 August 2021

Episode 6: “Was bringen internationale Klimaverhandlungen?” – “What use are international climate negotiations?” with Anke Herold, released 28 October 2021