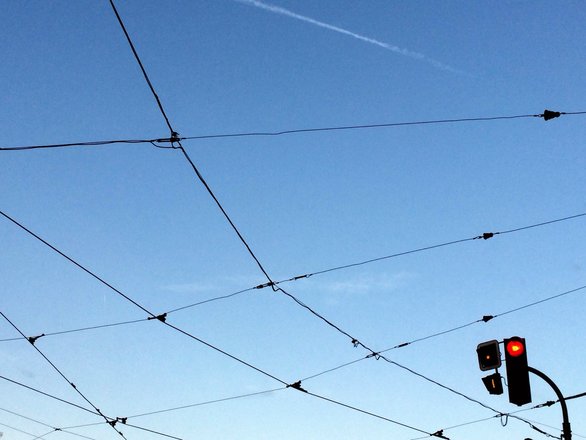 When it comes to protecting the climate, the transport sector seems to have gone off the rails. It certainly hasn’t made much progress. Transport accounts for around a fifth of Germany’s greenhouse gas emissions, but achieved only a 5.5 per cent emissions reduction between 1990 and 2012. In fact, including international air and sea traffic originating in Germany, transport emissions actually increased. But if Germany is to achieve its climate target of cutting its greenhouse gas emissions by 80 to 95 per cent by 2050 compared to 1990, the transport sector must make a major contribution. There are starting points for more transport-related climate action at many levels, focusing, for example, on propulsion technologies and fuels, avoiding unnecessary transport use, and promoting a modal shift.

“Transport can make a major contribution to cutting emissions,” says Dr. Wiebke Zimmer, Deputy Head of the Oeko-Institut’s Infrastructure and Enterprises Division. In a joint project with WWF, BUND, Germanwatch, NABU and VCD, Oeko-Institut researchers have developed a climate action scenario which shows that this is possible (see “Transport for tomorrow” on page 7). Wiebke Zimmer explains how it can be done: “A modal shift and avoiding unnecessary transport use are key steps – and that applies to passenger and freight transport alike.” Much more use should be made of rail and inland shipping for freight, because the transport sector’s large carbon footprint mainly results from the movement of goods by road. “That’s not surprising: Germany’s freight volume more than doubled between 1990 and 2011,” says Wiebke Zimmer. Starting points for the modal shift to rail and shipping include improving the rail infrastructure and boosting investment in the canal network. Another option is to extend the system of tolls for goods vehicles on all roads. “These measures must be based on appropriate, integrated and multi-modal transport planning within the framework of the Federal Transport Infrastructure Plan,” says the Oeko-Institut expert. But it’s not only the freight industry which needs to avoid unnecessary journeys and carry out a modal shift: the same applies to private transport. “It’s just as important to encourage more people to get out of their cars and onto their bikes or to use local public transport, including rail.” Here too, there are diverse entry points: a great deal can be achieved by improving local public transport: introducing additional routes and more frequent services, integrating the various modes to a greater extent, and enhancing provision for cyclists by expanding the cycle path network, creating “fast lanes” for cyclists and providing cycle parking at central locations. “We also need to promote new concepts of mobility and multi-modal offers,” says Wiebke Zimmer. “That includes car sharing, which, I’m pleased to say, is attracting a growing number of users in Germany, especially in cities.” This is due to new and improved offers and the practical options afforded by apps and smartphones, as well as a steady shift away from car ownership among young adults (see the interview with Dr. Konrad Götz on page 3). Parking space management that offers parking privileges can also be used to encourage car sharing.

The benefits of these new mobility offers are now recognised by countless users. But other transport policy measures – such as the introduction of speed limits or tolls for cars – are far less popular. “People forget that these measures can do much to enhance our quality of life,” says Wiebke Zimmer, “After all, fewer cars mean less noise and less pollution.” As she points out, transport has a direct and negative impact, especially in towns and cities. These include air pollution and the use of space for car parks. “The strategies for more climate action in the transport sector generally focus on the national, European or international level, but the municipalities have a crucial role to play,” says Wiebke Zimmer. “In a sense, they are the germ cell of sustainable mobility.” Local transport planning creates key policy frameworks for local residents’ mobility – and this radiates out to the national level as well. “What’s more, towns and cities will not only benefit from less noise and pollution; by introducing car-free zones, they can free up space for more creative uses.”.

Reducing final energy consumption is the key to improving the transport sector’s climate performance. “But this alone won’t cut greenhouse gas emissions by 95 per cent by 2050 – and as an industrial nation, Germany needs to position itself at the top end of the range of reduction targets,” says Wiebke Zimmer. “To achieve this target, additional sustainable and low-emission alternative fuels are needed.” Possible options are sustainable biofuels from residues and waste, and renewable power-to-fuel.

Shipping and aviation pose a particular challenge in relation to climate change mitigation, for these are particularly high-growth sectors. Another challenge here is establishing international mechanisms for reducing emissions.

As is evident from the measures outlined, there’s a lot of work to do to shrink the transport sector’s carbon footprint. “But they also show that although there is plenty of work to do, there are also plenty of options,” says Wiebke Zimmer. “Now transport policy-makers need to set the right course. And users need to take a good hard look at their mobility behaviour.” Christiane Weihe

Cutting transport emissions by more than 80 per cent by 2050 is possible, according to a joint paper produced by environmental organisations WWF, BUND, Germanwatch, NABU and VCD with scientific support from the Oeko-Institut. The paper, entitled “Climate-friendly transport in Germany”, centres on a climate action scenario which draws on the organisations’ ideas about how sustainable transport targets can be achieved. It defines a comprehensive package of strategies and measures, including a modal shift, avoidance of unnecessary transport use, and improved efficiency across all forms of transport. The introduction of alternative propulsion systems and the use of low-emission fuels are other components of the package. The paper also looks at policy measures to cut private vehicle use and to introduce more stringent EU-wide CO2 limits for cars and commercial vehicles.

According to the scenario, passenger transport can be reduced by 15 per cent by 2050. A greater reliance on flexible mobility options – local public transport, cycling and car sharing – is anticipated. Movement of goods will initially continue to increase, but will then fall back to approximately the current level. A phase-out of fossil fuels and a modal shift to rail and inland shipping can do much to cut emissions over the long term.

Based on the measures outlined, the Oeko-Institut concludes that there is potential to reduce the transport sector’s final energy demand by around 70 per cent by 2050 compared to 2005, which would make it possible to achieve an 86 per cent cut in greenhouse gas emissions compared to 1990, according to the joint paper. As the prerequisite, Germany must rigorously pursue energy system transformation in the electricity industry, making use of renewables-based power-to-gas and power-to-fuel in vehicle propulsion systems. However, in the view of the Oeko-Institut’s experts, more research is needed on whether, and how, biofuels and power-to-gas/power-to-fuel can be utilised in a manner that guarantees compliance with stringent sustainability criteria.

Up to date: Green light for reduction of CO2 gases from transport

New challenges for the power industry

Super 95 or 98, E10 or not, diesel or automotive LPG: we already have a range of vehicle fuel options available. But there’s… more

If we want people to choose sustainable transport options, we have to offer them something in return, says Dr. Konrad Götz.… more