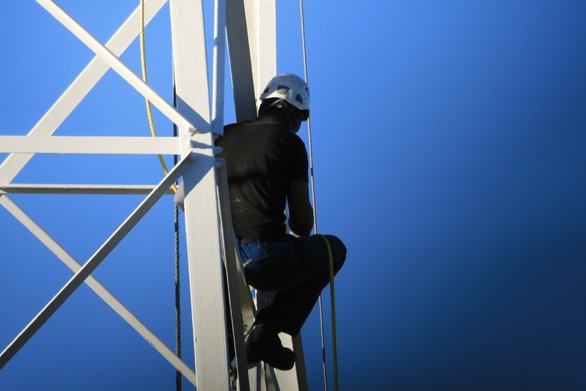 Germany has set itself clear targets for the coming years and decades: a 40 per cent reduction in greenhouse gas emissions by 2020 compared with the 1990 baseline, with further goals set for 2030 (55 per cent), 2040 (70 per cent) and 2050 (80-95 per cent). There are 35 years left to make energy system transformation a reality. Its success will depend on implementation of the agreed measures, the adoption of new policy instruments, and continuous monitoring of progress.

Every two years, the German Government – like all the EU Member States – is required to assess greenhouse gas emissions trends for the coming 20 years or so in a projections report, which is prepared by a research consortium involving the Oeko-Institut. “The projections report for 2015 charts greenhouse gas emissions trends to 2035,” explains researcher Julia Repenning, Deputy Head of the Energy and Climate Division at the Oeko-Institut’s Berlin office. “It covers all the measures introduced before the end of August 2014.” It is already apparent that even for the period to 2020, the targets cannot be met without additional efforts: the report predicts emissions reductions of just 32.7 per cent by 2020 – a clear shortfall compared with the 40 per cent climate target. The experts are also forecasting a reduction of around 43 per cent (instead of the required 55 per cent) by 2030 and around 48 per cent by 2035. “These figures are dependent on a number of variables, so sensitivity analyses were also carried out,” as Julia Repenning explains. “If fuel prices and population growth increase, we expect emissions to fall by 31.9 per cent. With a smaller electricity export balance and lower economic growth, a 35 per cent reduction may be within reach.”

In its National Energy Efficiency Action Plan and Climate Action Programme 2020, adopted at the end of 2014, the German Government sets out a package of measures aimed at achieving further emission reductions; however, these are not covered in the latest projections report. “The aim is to utilise a variety of instruments – such as better energy efficiency in commercial vehicles, and methane emission reductions from landfill – in order to close the climate mitigation gap of 62.5 to 100 million tonnes CO2 equivalent by 2020,” says Julia Repenning. For the measures envisaged in the Climate Action Programme, the Oeko-Institut has calculated the emissions savings that can be achieved. One example is KfW’s urban energy modernisation programme, which should be developed and expanded. “The calculations show that this could save 1.2 million tonnes of CO2 by 2020 if the programme budget is increased to 100 million euros a year from 2016,” says Julia Repenning. Another option is to expand the road user charge scheme for heavy goods vehicles. Extending the scheme to goods vehicles weighing more than 7.5 tonnes and introducing it on Germany’s federal highways, according to the calculations, would yield a CO2 reduction potential of half a million tonnes. And these are just two examples – there are many more, such as expanding the CO2 Building Modernisation Programme, promoting a modal shift to rail, and encouraging resource efficiency. The Oeko-Institut’s experts have produced detailed calculations showing how the 2020 climate targets can be achieved in the various sectors.

But 2020 is just a staging post: the main focus is on 2050, the target year for the energy turnaround. The second round of modelling looks at the 2050 climate scenario and investigates where there is potential to work towards the final goal. In this project, commissioned by the German Federal Ministry for the Environment, Nature Conservation, Building and Nuclear Safety, the Oeko-Institut – in collaboration with the Fraunhofer Institute for Systems and Innovation Research – is analysing the level of emission reductions that can be achieved with Germany’s current energy and climate policies and which strategies and actions are needed to achieve the targets set. “With that aim in mind, in the second of the three rounds of modelling, lasting until autumn 2015, we are developing two separate scenarios with differing levels of ambition,” explains Julia Repenning. “The most ambitious would achieve a 95 per cent reduction in greenhouse gas emissions.” As the first round of modelling in 2014 showed, the pathway for 2020-2040 described in the German Government’s Energy Concept is sufficient to achieve an 80 per cent drop in emissions by 2050. However, if the aim is to achieve 95 per cent by 2050, more ambitious interim targets are needed. As the Oeko-Institut’s expert makes clear: “The interim emission reduction targets should really be 45-50 per cent for 2020 and 85 per cent for 2040 if Germany is to avoid having to achieve disproportionately large cuts in its emissions in the final decade to 2050.”

The first climate scenario models show that in the coming years, significant emission reductions will have to be made as quickly as possible. “This can be achieved by applying a simple formula: energy efficiency first, then coal-free power generation and more efficiency in the transport sector,” says Julia Repenning. Firstly, energy efficiency – in all sectors of the economy – has a crucial role to play in mitigating climate change. In trade and industry, for example, this means using highly efficient LED lighting and light- and motion-sensitive controls. In the buildings sector, energy consumption must be reduced by 80 per cent by 2050, with the remaining energy needs being met by renewables in future. Secondly, full decarbonisation of power generation is essential. This will require the ongoing expansion of renewable power generation capacities, especially wind and solar. “In this way, the renewables share of power generation can be increased to more than 90 per cent by 2050,” Julia Repenning concludes. And thirdly, the transport sector must cut its emissions substantially in the next 10 to 15 years. This can be achieved, for example, by promoting a modal shift of freight from road to rail and by encouraging people to leave their cars at home and use an expanded local public transport network. A package of measures to further improve vehicles’ fuel efficiency is also needed.

If greenhouse gas emissions are to be cut by 95 per cent by 2050, substantial reductions are needed in every sector. “But the non-energy sectors have only limited potential to reduce emissions – and this applies especially to agriculture. Disproportionately high mitigation efforts will therefore be required from all the other sectors,” explains Julia Repenning. In her view, it is particularly important to keep a close eye on agriculture. “Nitrous oxide (N2O) will replace CO2 as the dominant greenhouse gas by 2050, and farming will be the main source of these emissions,” she explains. The emissions cuts needed here can only be achieved with a transformation of our food systems – “in other words, a drastic reduction in our consumption of animal products, especially meat”.

As Julia Repenning points out, when exploring the potential for emission reductions, a broad view is essential. “At present, efforts to protect the climate have focused mainly on the energy sector,” she says. “But to achieve ambitious climate targets, substantial mitigation efforts are needed in other sectors as well. No sector should be hiding behind the others. That’s an issue which we should be discussing too.” For this climate scientist, mitigation measures in every sector, according to its specific capacities, are important in moving towards the 95 per cent target – and therefore towards a society that has become genuinely sustainable by 2050. Christiane Weihe

I am proud to say that I myself had a hand in pioneering energy system transformation at the Oeko-Institut in the early days.… more