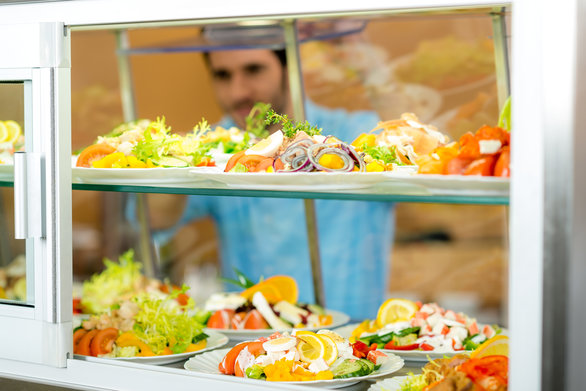 The principle: plant-based foods. Animal foods as a supplement. For example, fish once or twice a week. And some meat, but not more than 300 to 600 grams in a seven-day period. That is the diet recommended by the German Nutrition Society (DGE). It would not only be healthier than what Germans currently eat – the average German gets through more than a kilo of meat per week. Eating in accordance with DGE recommendations would also have many positive consequences for the climate and the environment. A study by the Oeko-Institut estimates that the greenhouse gas emissions caused by such a diet are twelve percent lower than those of the average high-meat equivalent. A vegetarian diet could cut climate-damaging emissions by as much as 26 percent; a vegan one could push this reduction to 37 percent.

The German diet is becoming ever more varied and people are making more conscious choices. Sales of organic foods have risen steadily in recent years, totalling 10.9 billion euros in 2018. The number of flexitarians – people who deliberately reduce their meat consumption – is increasing; according to a survey conducted by the German consumer research society GfK in 2016, 37 percent of people now put themselves in this category. The number of vegetarians and vegans also continues to rise: according to the food report produced by the Federal Ministry of Food and Agriculture (BMEL) in 2019, six percent of respondents in a representative survey classed themselves as vegetarian and one percent as vegan. Plant-based alternatives to meat and sausages are becoming increasingly popular – and not only among vegetarians and vegans.

But from a sustainability perspective, German consumers are still eating too many animal-based foods. For example, they each get through about 60 kilos of meat per year – which contrasts with the DGE recommendation of 15.6 to 31.2 kilos. The figure of 60 kilos has not changed significantly since 2000. There has also been no significant increase in the proportion of particularly environmentally friendly and high animal welfare meat. Furthermore, the milk products that we consume involve livestock farming and hence represent a not inconsiderable part of the environmental footprint of our diet. “As well as through housing and transport, it is through food that we place the greatest burden on the environment,” explains Dr Jenny Teufel of the Oeko-Institut. “Around 15 percent of the greenhouse gas emissions of private consumption are attributable to the growing, processing, transport and storage of food and to food preparation and the disposal of waste.” And there are other sorts of environmental impact associated with our food. “For example, nitrogen emissions affect the soil, water and biodiversity, and biodiversity is also harmed by monocultures and pesticide use,” says Kirsten Wiegmann, Senior Researcher in the Oeko-Institut’s Energy & Climate Division. “If you include these problems, then food causes more than a quarter of the damage to the environment and climate that results from private consumption.” It is therefore important to eat fewer animal products and thus reduce the environmental burden of agriculture (for further information see “More checks, fewer animals” on page 12). “Eating in accordance with DGE recommendations would be a huge step forward.”

HALF THE POPULATION EATS OUTSIDE THE HOME

How can a more sustainable German diet be achieved? In collaboration with several partners involved in practical aspects, the Oeko-Institut has looked at this issue in the project “TRAFO 3.0: Developing a model for socio-ecological transformation processes in three practical fields of application”. TRAFO 3.0, which is funded by the German Federal Ministry of Education and Research, uses concrete examples as a basis for analysing how transformation processes can be managed and promoted. One of the processes it considered was reducing the consumption of meat and other food products of animal origin. “One focus was on mass catering. It is apparent that the number of people who eat outside the home – at school, in the canteen or in the nearby snack bar – is growing rapidly. Around half the population are not at home for most of their meals; about 40 percent of what they spend on food is going into the away-from-home market,” explains Jenny Teufel, Senior Researcher in the Sustainable Products & Material Flows Division. “This market is therefore very important in connection with a transformation towards sustainability.” In Teufel’s view, mass catering is also an interesting research field because it can trigger changes at various levels – such as in terms of the amount of meat eaten and the attractiveness of meat-free food in the eyes of guests. “The food provided in nurseries and schools also has a major influence,” says Teufel, “because it can help children and young people learn about sustainable nutrition.”

As part of the project, the researchers spoke to various players involved in mass catering and organised a workshop with kitchen managers and decision makers. One of the findings was that the transmission of knowledge and experience is important – for example, in the training of cooks and chefs. “Serving vegetarian and vegan food or dishes with a small proportion of ingredients of animal origin involves re-thinking menus and abandoning the traditional menu structure of meat, a starchy filler food and vegetables or salad. But training courses do not yet cover this. As a result, organisations that want to cook more sustainably and use fewer animal products are often organising training themselves,” says Dr Jenny Teufel. “The subjects – both theoretical and practical – covered in training courses for caterers must be revised. And the dialogue between best-practice actors in this area and people who want to make their catering more sustainable is also very valuable.”

A key aspect of more sustainable nutrition is the prevention of food waste, which is responsible for 15 percent of food-related greenhouse gas emissions. Every consumer throws away about 75 kilos of food each year. The majority of this waste – a total of 6.1 million tonnes or 52 percent – arises in private households. “Fourteen percent arises in away-from-home catering, 12 percent in primary production and 18 percent in processing,” explains Dr Jenny Teufel. As examples of starting points for preventing waste, Teufel mentions better planning and proper storage of food. “That applies both to private households and to mass catering. In the case of catering, it is of course important to take account of feedback from guests. Regular surveys could help ensure that the food on offer is geared to customers’ needs and portion sizes are appropriate. This feedback is particularly important when changes to food plans or reductions in the proportion of animal products on the menu are being contemplated.”

And how can people be persuaded to attach greater value to sustainable nutrition? The Oeko-Institut addressed this issue with regard to mass catering in the project “Shaping ecological change” which it conducted for the German Environment Agency. “Information is important, but it shouldn’t be problem-focused; instead it should be communicated positively, perhaps through storytelling or via an easily understood logo. In addition, guests can be involved in planning the menu – perhaps via surveys or idea contests. Eating habits can also be influenced by nudging – small changes that create incentives. For example, this could involve always offering one sustainable dish as standard, or offering different portion sizes.” But what is crucial is that it must taste nice. Then it can be vegan, vegetarian or low meat.

The cost of moving towards more sustainable nutrition is also an important factor. “There is enormous cost pressure in mass catering and that can inhibit change. But one can do things such as refinance high-quality meat by optimising meal planning,” explains Teufel. Another useful step could be to make foods of animal origin more expensive – for example by removing the reduced rate of VAT on meat, abolishing environmentally harmful subsidies or introducing an import tax on animal feed. However, Teufel points out that such a step should always be coupled to measures to finance the necessary restructuring of livestock farming. “Otherwise, livestock farming in Germany will simply come to an end and we shall be importing cheaper meat from animals raised in poor conditions.” It is also important not to ignore low-income households when making animal-based foods more expensive. “We need to find ways of enabling them to eat sustainably produced meat despite the higher cost.”

The Oeko-Institut researcher believes that food and agriculture have finally become one of the priorities on the agenda of the federal and state governments. In her view there are many instruments that could be used to make our nutrition more sustainable. They include food labelling, education and information campaigns and changing the nationwide regulations on the training of cooks. “And last but not least,” says Dr Jenny Teufel “public procurement can exert direct influence, for example via clear specifications on issues such as a compulsory proportion of organic food, reducing food waste and using animal-based foods in accordance with the DGE recommendations in school canteens and government institutions. It would also mean that policy would have an important part to play as a positive role model for others to follow.”

Article on the Oeko-Institut’s website: Sustainable nutrition, or: Who eats strawberries in winter?

March 2014 issue of the magazine eco@work: What to eat? Healthy food, small footprint

Food report of the Federal Ministry of Food and Agriculture

“Many have completely lost sight of the value of food”

Interview with Thomas Voss, Commercial Director of the LWL clinics in Münster and Lengerich

More than 1,700 lunches are prepared and eaten in two clinics in Münster and Lengerich every day. On top of that there are…

more
“Many have completely lost sight of the value of food”