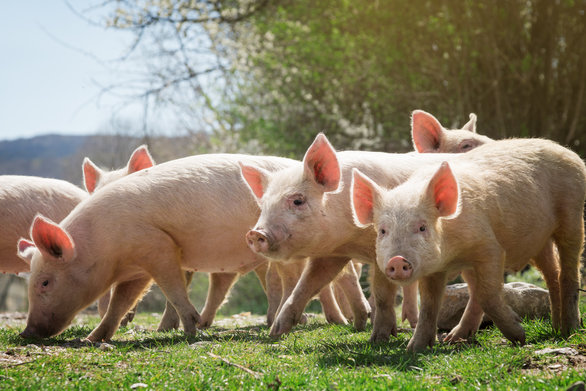 The escalope on our plate or the milk that we stir into our morning coffee don’t only affect the cows that are reared and kept for these foods. Our meat and milk consumption also influences the environment and the climate in various ways. It involves high levels of land and resource use, pollution of surface water and groundwater with high levels of nitrates, emissions into the air and land-use change for feed growing; all this leads in turn to biodiversity loss and increased greenhouse gas emissions. The Oeko-Institut is engaged in a number of projects that are exploring how these adverse impacts on the environment and climate can be reduced.

“The consumption of animal products such as meat and milk has adverse impacts at various levels – on our health, on animal welfare and on the environment and climate,” says Kirsten Wiegmann, Senior Researcher at the Oeko-Institut. “For instance, the use of antibiotics pollutes water and creates a risk of antibiotic resistance. Feed growing results in the use of pesticides, herbicides and synthetically produced mineral fertilisers. Another major problem in animal farming is the loss of nitrogen into the environment. Nitrate is frequently mentioned, but ammonia is also a major concern, since it leads to the formation of fine particulate matter and ozone. Greenhouse gases – especially methane – are a problem too.

“Cattle kept for milk and meat produce methane during digestion,” explains the researcher from the Energy & Climate Division. “These biological processes are of course difficult to control. There is as yet no reliable technology that can reduce methane production in the digestive system of ruminants, although research in this field has been going on for years.”

Achieving greater sustainability in agriculture requires a multi-pronged strategy. Adopting an integrated policy to reduce nitrogen emissions is a key starting point. The Oeko-Institut and the Research Institute of Organic Farming (FiBL) have explored the basis for this together in the project “Instruments and measures for reducing nitrogen in the context of the Baden-Württemberg nitrogen strategy”. “Agriculture uses synthetic nitrogen as fertiliser because there is a shortage of this nutrient in plant-available form in nature,” explains Kirsten Wiegmann. “This produces large nitrogen surpluses that escape into the environment, putting species diversity and human health at risk.” The surpluses arise mainly from regional separation of crop growing and animal husbandry, and from bought-in animal feed. “Dung and liquid manure are fertilisers and fermentation of liquid manure in biogas plants, for which they provide the main feedstock, could reduce the methane emissions. But it is not worth transporting dung and liquid manure elsewhere unless it is first subjected to expensive processing,” says Wiegmann. “Because of this, animal farming areas are saddled with high nitrogen emissions.”

As part of the analysis for the Baden-Württemberg Environment Ministry, the Oeko-Institut produced recommendations on reducing nitrogen surpluses. “We need radical long-term measures that target both the agricultural sector and people’s eating habits,” says Wiegmann. “For example, we must urgently reduce animal stocks. Moreover, we mustn’t allow these stocks to become further concentrated in particular regions, as has happened in the past. The reintroduction of production systems in which a minimum area of land per unit livestock is assured is overdue.”

In addition, an expansion of organic agriculture has worthwhile potential in terms of reducing nitrogen, because mineral fertilisers are banned in organic systems. Another key element in the Oeko-Institut’s analysis is an altered legal framework. “This must consider nitrogen emissions on an integrated basis and specify binding reduction targets – perhaps even via a separate nitrogen act,” says Wiegmann. “At the same time there must also be a programme of measures that shows how these targets can be achieved.” It is also important to monitor whether farms are actually complying with the rules. “At present there are not even any statistics on how much mineral fertiliser is being applied.”

As part of the “TRAFO 3.0” project, the Oeko-Institut explored how activities such as pig farming can become more sustainable. The resulting recommendations include tapping into societal trends such as the increasing openness to products of more animal-friendly farming systems; one way of doing this would be through a compulsory declaration of animal welfare conditions on the products. “It is also worth promoting technical, institutional and social innovations and, for example, enabling the establishment of regional value chains by encouraging cooperation between the different players involved, or using digital media to market particularly high animal welfare meat,” explains Dr Jenny Teufel, Senior Researcher in the Sustainable Products & Material Flows Division. It is equally important, she notes, to dismantle non-sustainable structures. “For example, the practice of keeping fattening pigs in unstructured pens on fully slatted floors should be ended. It is associated with disease and behavioural disorders,” says Teufel. “In addition, time windows should be used and farm handovers, for example, actively supported in order to achieve goals such as reductions in animal stocks or improvements in animal welfare.” The Oeko-Institut also believes that it is worth looking at Germany’s neighbour, France, which has published a roadmap for food and agriculture policy to 2022 that is geared to sustainability. “Aspects of this include declaring husbandry conditions on meat products and ending the use of glyphosate.”

Agriculture is certainly facing enormous challenges in relation to the climate and environment. In the researcher’s view, the European level also has an important part to play in tackling these challenges. “For one thing, we must of course comply with the EU requirements in relation to nitrate in groundwater; clear fertiliser regulations are needed here,” says Kirsten Wiegmann. In addition, the Oeko-Institut regards the EU’s Common Agricultural Policy (CAP) as a potentially important lever for greater sustainability in agriculture. “The EU’s agricultural aid money must at last be tied to compliance with higher environmental and animal welfare standards – I expect that this will eventually happen,” says the researcher. “That would be another important move towards more sustainable agriculture, requiring farmers not just to change their thinking but to become more sustainable for economic reasons.”

The principle: plant-based foods. Animal foods as a supplement. For example, fish once or twice a week. And some meat, but…

“Many have completely lost sight of the value of food”

Interview with Thomas Voss, Commercial Director of the LWL clinics in Münster and Lengerich

More than 1,700 lunches are prepared and eaten in two clinics in Münster and Lengerich every day. On top of that there are…

more
“Many have completely lost sight of the value of food”