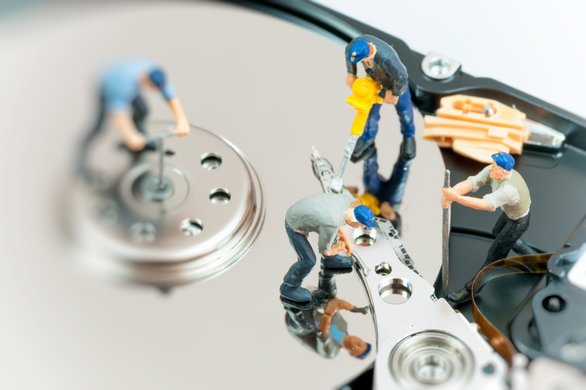 Ultra-high definition and HDMI, smart TVs and 3D, curved displays and OLED screens ... each new generation of TVs offers an enticing array of features which many consumers plainly find hard to resist. The brand-new flatscreen is barely out of its box when along comes the manufacturer with a newer model that looks even shinier than the last. Bigger, faster, more high-definition ... at knock-down prices which shatter buyers' inhibitions. German households generally replace their modern flatscreen TVs after five or six years. The old-style cathode ray tube TVs were kept for much longer - 10 or 12 years. So what is driving the trend towards obsolescence: in other words, the shorter product lifespan and usage time of electrical and electronic products, which is the subject of much debate and research? Are we right to be suspicious: are manufacturers deliberately building planned obsolescence into their designs? And how does this shorter duration of use impact on people and the environment? These are just some of the questions explored by the Oeko-Institut in a study commissioned by the German Federal Environment Agency (UBA).

"In fact, looking at the high replacement rate for TVs, we see that obsolescence is mainly psychological," says the Oeko-Institut's Senior Researcher Siddharth Prakash, who led the study. "More than 60 per cent of functioning flatscreens were replaced in 2012 simply because consumers wanted to upgrade to a better product." Replacement purchases were driven, he says, by consumers' desire for new and better features and functions and by falling prices. "Of course, advertising feeds this rampant consumerism as well." The result? Seven million new TVs in German living rooms in 2015 alone.

"For most products, first-use duration has decreased in recent years," says Siddharth Prakash. "We found that more and more devices were being replaced even if they were still in good working order." Technological innovations are often the trigger, as we saw with TVs. "It's the same for white goods such as washing machines and fridges: around one third of the purchases are made to replace an appliance that is still working perfectly. The purchase is motivated purely by the consumer's desire for an upgrade." It's a desire that manufacturers and service providers are only too happy to encourage. "We need only think of telecoms packages, with the offer of a new smartphone every year," says Siddharth. The useful life of mobile phones is far too short, he adds: "According to Stiftung Warentest, 68 per cent of consumers replace their phones within three years, and only 9 per cent of them do so because the battery is weak or faulty." By contrast, 40 per cent were keen to upgrade and 28 per cent acquired a new mobile phone under the terms of their contract.

The study also found that from 2004 to 2012, average first-use duration of white goods was 13 years - a decrease of around one year. The percentage of appliances being replaced within just five years due to technical defects has increased noticeably: from 3.5 per cent to 8.3 per cent during the period under view. "With white goods, it's clear that technical defects are the main reason for purchasing a replacement," says Siddharth Prakash. However, the average duration of first use has remained fairly long. For washing machines, for example, average first-use duration in 2012/2013 was 11.9 years. "What is worrying is the high incidence of faults occurring during the first few years of use," he says.

In addition to surveying manufacturers, repair centres and consumers, the experts analysed product lifetime studies from Stiftung Warentest and research from The Wrap Institute in the UK in order to pinpoint the causes of obsolescence. The analysis showed that almost every component or part installed in a device or appliance can develop a fault - but some components and parts are more likely to do so and therefore to limit products' useful life.

Repairs are also a challenging issue, according to the researchers. "Having a defective product repaired is generally a good option for the environment and has many positive social impacts in terms of jobs, for example, but financially, it doesn't always pay off for the consumer," says Siddharth Prakash. "This is partly because repair costs tend to be high and the costs of a new appliance are low." In their analysis, the experts calculated the life cycle costs of TVs, washing machines and notebooks. The cost breakdown highlights the critical aspects of repairs. "From the consumer's perspective, repairs really only make financial sense for high-end goods which rarely or never develop a fault," says Siddharth Prakash. "Cheap goods are simply not worth repairing." Time will tell whether and how the independent repair sector will rise to the challenges posed by current market trends and product development.

What is certain is that the useful life of electrical and electronic devices is decreasing - and that is bad for the environment and resources. "We see less environmental impact from durable products," says Siddharth Prakash. "For example, greenhouse gas emissions from a more durable washing machine are 700 kg to a tonne lower than from a product with a shorter lifespan. The figure is 600 kg for TVs and 300 kg for notebooks. These emissions could be reduced by switching to a more durable product." What's more, electrical and electronic appliances contain a number of raw materials which generally go to waste if the product has poor longevity. "This applies to precious metals such as gold and silver, the rare earths, and other critical raw materials like cobalt, palladium and indium," the Oeko-Institut expert explains. Extracting and processing these resources often has a negative impact on human health and the environment. Take cobalt: most of the global supply is sourced from the Democratic Republic of the Congo, where mining conditions put lives at risk and violate human rights. Cobalt mining claims around 100 lives a year and child labour is not uncommon.

But isn't it often said that a new, energy-efficient appliance saves energy and costs? The Oeko-Institut has explored this issue in various studies as well. "There's no clear answer -whether it is worth extending longevity and useful life for the sake of the environment very much depends on the individual product," says Siddharth Prakash. "One factor which has a bearing is consumer behaviour; another is the level of the efficiency gains obtained from the new product; a third is the manufacturing process." If buying a new product is the only option, the consumer should of course choose one which is as energy-efficient as possible. "But if the existing electrical or electronic device is still in good working order and was only purchased a few years ago, the durable product is generally better for the environment," Siddharth Prakash explains. In other words, using the product for as long as possible benefits the environment. And let's be honest: the natural world has much more attractive features than even a top-of-the-range flatscreen TV. Christiane Weihe

At a time when mobile phone companies promote themselves by offering annual upgrades to the latest smartphone, the Fairphone… more

A task for the whole of society

The useful life of electrical and electronic devices is shortening, according to the Oeko-Institut's latest obsolescence… more

A task for the whole of society

Throwing out the throwaway society

On 2 December 2015, the European Commission adopted an ambitious package of measures to stimulate Europe's transition… more

Throwing out the throwaway society