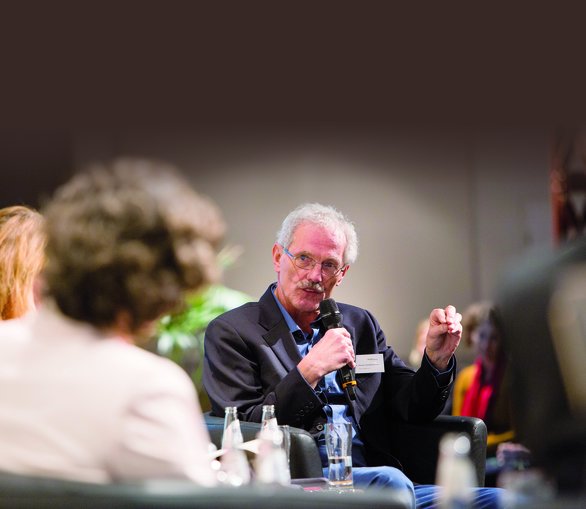 He has an insider’s knowledge of the Oeko-Institut from his diverse roles in gathering and sharing information – both as an outspoken rebel scientist and as the “go to” person for policy-makers and business. After 37 years with the Oeko-Institut, many of them as a member of the Executive Board, Professor Rainer Griesshammer will be retiring in summer 2018. He talks to eco@work about past and present challenges facing science, new approaches to generating knowledge, and the Oeko-Institut’s role in sharing information.

Professor Griesshammer, how have the Oeko-Institut and science evolved over the years?

The major environmental crisis in the 1970s and 1980s was the moment when conventional science failed. It failed to predict the crisis, and it often defended the use of high-risk technologies and toxic chemicals. The Oeko-Institut was set up in 1977 because the environmental movement needed independent scientists. This was an affront to the scientific and political establishment and prompted massive criticism of the Oeko-Institut’s studies on nuclear power plants and chemicals, for example, with claims that the work was unscientific or even subversive. The situation remained largely unchanged until 1986, the crisis year for advanced technologies with the Chernobyl disaster and the poisoning of the Rhine following the fire at the Sandoz chemical plant in Basel. It made a lot of people stop and think.

What are the signs of this change?

Today, there are environmental scientists working in the universities, in the ministries and public authorities and even in businesses. The Oeko-Institut has become one of the world’s leading think tanks. It has built up a very good working relationship with the universities over many years, as we see from the joint projects, lectures and real-world laboratories, the planned joint professorship with the University of Freiburg and the major collaborative project on systemic innovation with the University of Darmstadt.

The Oeko-Institut aspires to identify environmental and sustainable alternatives. How does it share this message?

It uses a variety of channels. Making our findings publicly available has been part of our mission statement from the start. Nothing should be hidden away in a drawer, as happened so often in academia in the past. We have many ways of raising awareness of our research studies: press releases, our website and social media, policy statements and our work in a wide range of committees. And we also provide advice directly to decision-makers in Parliament, the ministries, NGOs and business.

How difficult is it to disseminate environmental knowledge nowadays?

It depends on the topic. Interestingly, there is more interest in problems than solutions. Acute environmental problems at the local level, such as poor air quality or noise, are better understood than the global challenges – climate change or biodiversity loss, for example – which have a longer latency period. It is more difficult to raise awareness if the environmental impacts are not yet part of people’s lived experience.

Another challenge we often face is that we are researching highly complex issues and our findings must be fully substantiated, whereas the media tend to be more interested in brief and succinct messages – sound bites, if you like. It’s sometimes difficult to reconcile the two.

The integration of practical experience is becoming increasingly important in knowledge acquisition.

We have involved practitioners from wider society in our work from the outset and always adopted an interdisciplinary approach to problem-solving, focusing on practical action. However, we never really gave much thought to the underlying methodology. Over the past few years, this same methodology has been defined in detail as transdisciplinarity and is now one of the specified criteria that must be met to secure financial support from many of the programmes run by the major funding agencies.

Is citizen participation easy to achieve?

It’s not easy but it is essential. At the Oeko-Institut, we have many years of experience in information sharing, communication and participation at various levels: the stakeholder dialogues about Frankfurt Airport, the Ecodesign Directive, power grid expansion and the search for a final storage site for nuclear waste are just a few examples. We recently summarised all these projects and experience in a working paper, describing all the key criteria that should apply to consultation processes, such as a flexible approach to goals and planning, along with transparency and fairness.

Whose side are you on in these processes?

I’m on the side of the environment and sustainability. However, we have seen some green-green conflicts in recent years. People can have wildly opposing views about an individual wind farm or pumped storage power plant, for example, and some citizens’ groups are against wind power or grid expansion on principle.

One of the trends we are seeing nowadays is to cast doubt on the opinions of experts or twist what they say – the keyword here is fake news. Is this something that concerns the Oeko-Institut as well?

In principle, it is a good thing to re-examine traditional methods and knowledge and look at alternatives. After all, that’s what we do at the Oeko-Institut. But spreading doubt is not enough. The criticisms and the alternatives have to be properly substantiated. They have to be based on real, not “alternative” facts.

What can we do to counter fake news?

We can counter fake news by being both pro-active and reactive on issues which we know are contentious and by publishing position papers or FAQs, for example. That’s what we have done with electromobility, for instance. Better still, we can anticipate key debates, gather the data, analyse the various positions and alternatives and thus prepare the ground for decision-making by society. The Power Grid Transparency project is a good example of the role that we can play. The power grid modelling that we undertook successfully within this project framework now enables us to assess plans more accurately and model our own alternatives for grid expansion, as well as those presented by environmental organisations.

You are about to retire from the Executive Board at 65. Which challenges do you see ahead for the Oeko-Institut and your successor?

My successor Anke Herold will, I am sure, promote the Oeko-Institut’s international agenda more vigorously than I did, and she may well adopt an even more interdisciplinary approach. A key challenge that I can foresee is that many technologies, products and services are evolving ever more rapidly, making it increasingly difficult to react in time and produce the scientific knowledge and appropriate policy guidance that are required. Digitalisation and genome editing are just two examples. A faster response is needed from legislators here. Overall, however, I have no doubt that the Oeko-Institut is well-placed to analyse and evaluate these new trends.

Professor Rainer Griesshammer has been associated with the Oeko-Institut since 1980, for much of that time as a member of the Executive Board. His scientific work focuses mainly on product-related environmental and climate performance and transformations. He played a key role in the development of the PROSA Product Sustainability Assessment methodology and led the initiative to establish ecotopten.de, a product information platform. In 1984, Rainer Griesshammer, who holds a PhD in Chemistry, published the bestselling green guide Der Öko-Knigge. From 1992 to 1994, he was a member of the German Bundestag’s Enquete Commission on the Protection of Humanity and the Environment. The German Federal Foundation for the Environment honoured him with its Environmental Award in 2010.

In the early 2000s, transdisciplinary research was very much a niche phenomenon and was being trialled solely in fields such… more

Information for a sustainable society

Knowledge is the basis of our work at the Oeko-Institut. Our researchers share their expertise, work on an interdisciplinary… more