The search for a final storage site 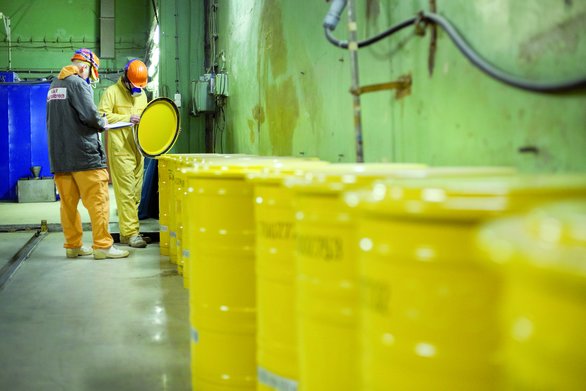 It is a process of superlatives. It affects the whole country. It focuses on all the regions. It will preoccupy our society for many generations to come. It is about building a facility that guarantees the highest possible level of safety for a million years to contain surely the most hazardous type of waste of all: high-level radioactive waste (HLW). The search for a final storage site officially began in September 2017 – and the Oeko-Institut’s experts are working to ensure that it proceeds as smoothly as possible. They provided support for the preparations at various levels and will continue to share their expertise as the process unfolds.

The German Commission on the Storage of High-Level Radioactive Waste was the key player in preparing the search for a final storage site, publishing its final report in July 2016. “The fact that, based on the consensus on the need for a new search, the Commission managed to define the procedure in such detail and take equal account of both the technical and the social dimensions is a major success,” says Stefan Alt from the Oeko-Institut. “This was certainly not a given. After all, there were so many different social groups involved, from federal and state politics, the churches and trade unions, environmental organisations, the energy sector and various scientific disciplines.” Now that the procedure has been described in detail, an open-ended search can begin. As a member of the Commission, the Oeko-Institut’s CEO Michael Sailer was also involved in shaping the process. “The Commission proposed a model showing how the search for a final storage site should be organised, based on a transparent selection procedure and clear criteria that the future repository must meet,” Stefan Alt explains. “The search will focus on deep geological formations – the only ones stable enough to store high-level radioactive waste over extremely long time periods. They are also the only formations for which we can make credible predictions for a period of around one million years.” Suitable types of host rock that can be considered are tonstein, rock salt and crystalline rocks such as granite. The future repository will store almost 35,000 spent fuel elements and 8,000 waste canisters, known as casks, containing high-level radioactive waste from reprocessing. Currently, this waste is kept in interim storage facilities.

In March 2017, the German Bundestag passed the amended Repository Site Selection Act (Standortauswahlgesetz – StandAG). “The reorganisation of the requisite structures and agencies was already well under way by this point,” Stefan Alt explains. “They are also based on the Commission’s recommendations. With the establishment of the new Federal Office for the Safety of Nuclear Waste Management (BfE) and the Federal Company for Radioactive Waste Disposal (BGE), a clear separation has been made between the supervisory authority and the operator.” These organisations are now responsible for successfully completing the search for a final storage site by the ambitious target date – 2031.

The search for a final storage site was given the official go-ahead in early September 2017. “The first step is to exclude unsuitable areas, so regions without the right type of host rock or with recent volcanic activity or a higher seismic risk will undoubtedly be ruled out early on,” says Stefan Alt. “The next step is to carry out surface exploration of selected sites that meet the minimum criteria. And the final stage involves an underground inspection of the potential sites, a comparative analysis and the selection of a site for the repository.”

Conflicts are inevitable in the search for potential sites, Stefan Alt is sure of that. “In Bavaria and Saxony, for example, the state governments are already on the offensive: they categorically refuse to allow a search on their territory on the grounds that no suitable host rock formations exist there. Those responsible for conducting the search may well arrive at the same conclusion, but if a region is excluded, that decision must be based on the application of the criteria, not on pure supposition.” To ensure that decisions are well-founded, minimum geoscientific assessment criteria and weightings, defined in the procedure, will be applied to determine the rock formations’ suitability as a host for a final storage site. If several options appear to be equally suitable, spatial planning criteria are applied. “For example, an assessment is carried out to determine whether there are residential areas, groundwater reserves or natural and cultural heritage sites nearby that must be protected. These factors are then weighted to identify the site that will have the least impact on these assets.” In order to direct the search for potentially suitable sites around the country, deep drilling now requires permission from the Federal Office for the Safety of Nuclear Waste Management (BfE). “Saxony recently attempted to make the case that this would kill off the geothermal rollout – but in fact, no one is being prevented from exploiting geothermal,” Stefan Alt explains. “This kind of claim needlessly discredits the selection process.”

A LOOK ACROSS THE BORDERS

The Oeko-Institut’s researchers are not only working on final storage in Germany – they keep an eye on what is happening elsewhere as well. “What is interesting is the varying extent to which countries struggle with the process of identifying a final storage site,” says Stefan Alt. “Take the Finns and the Swedes, who mainly have crystalline host rock formations available. They have already made good progress. On the assumption that the geological conditions are fairly similar everywhere, they build the repositories at the most practical and least controversial sites – at the nuclear power plants.” It is much more of a struggle in Switzerland, where three potential sites are currently being explored. “In Switzerland, as in Germany, every effort is made to ensure that the decision is seen as fair in what is a very complex process. This makes it all much more difficult,” he says.

The Oeko-Institut has also looked at the costs of the Swiss nuclear phase-out. A study, commissioned by the Swiss Energy Foundation (SES) and entitled Assessment and Plausibility Check of the 2016 Cost Study by swissnuclear, investigates whether the estimated costs of decommissioning Switzerland’s five nuclear power plants and disposing of the resulting waste are plausible and transparent. “The owners of the Swiss nuclear power plants are required by law to pay into a fund. The annual contributions are determined on the basis of these cost estimates, which are updated every five years,” Stefan Alt explains. “According to the latest estimates from the industry association, swissnuclear, these costs amount to around 22.8 billion Swiss francs. However, there are major cost risks associated with this figure.” The study identified serious flaws in the cost estimates, particularly for final storage. “No consideration was given to the legal and political risks associated with site selection, and the geological problems affecting construction and a scenario in which radioactive waste has to be removed from a storage facility have been underestimated. Any hidden cost risks will be covered by top-up payments as required, but these payments will not be met by the nuclear power plants themselves.” The Oeko-Institut is also critical of the study’s presentation. “The basis for the estimates is not transparent, which makes it difficult for the lay reader to follow in many places.” As a comparison, the costs of Germany’s nuclear phase-out are currently estimated at around 77 billion euros, but again, this excludes certain costs, such as the removal of nuclear waste from the Asse storage facility, which is not fit for purpose, and safeguards to facilitate the recovery of waste from the future repository, should this be necessary.

THE FUTURE AND THE PUBLIC

The Oeko-Institut focuses particularly on future generations and their involvement in the process – which includes raising awareness of the challenges that lie ahead. “Even if a site is identified, we are certainly looking at a period of 100 years or more until the repository is finally sealed.” So in 2014, together with the Independent Institute for Environmental Issues (UfU) and with support from the Legacy for the Future Foundation, the Oeko-Institut produced teaching materials for schools about final storage issues. “We have now updated these materials in light of developments and a new edition has already been published,” says Stefan Alt.

The experts are also available to give presentations to schools and other interested groups. “Extensive public participation is a key element of the search for a final storage site; this was one of the reasons why the National Support Body was set up as an independent entity to ensure that the social dimension of this process is not overlooked,” says Stefan Alt. “But it is also important to empower people to participate in a meaningful way.” That means providing information in good time and communicating in a clear and transparent manner. In parallel to the work in various expert bodies, such as the German Commission on the Storage of High-Level Radioactive Waste and the German Commission on Radiological Protection, he sees an important role for himself and his colleagues at the Oeko-Institut in such communication. “There needs to be dialogue among professionals, affected communities and the public at large. Based on the increased awareness of the process and the opportunities to participate, one of the aims must be to create an understanding of the final decision when it is ultimately taken, whatever that decision may be,” he says. “The agencies involved should not hide behind press releases and websites; they must come out and talk to people and provide as much support as possible for affected communities.”

Stefan Alt works on the issue of radioactive waste in many of his projects. He was a consultant for the German Commission on the Storage of High-Level Radioactive Waste and has advised the German Federal Ministry for the Environment, Nature Conservation, Building and Nuclear Safety on the Asse pit and the interim storage of radioactive waste. He has also conducted assessments of decommissioning and final storage programmes in other countries. Remediation of soil contamination and groundwater resources are among his other areas of expertise. A graduate geologist, Stefan Alt has worked for the Oeko-Institut since 2007.