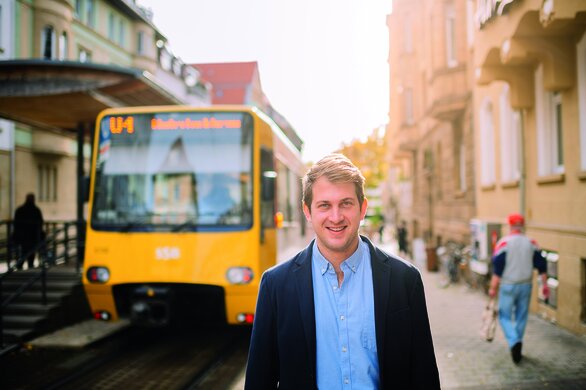 Now it is Parliament’s turn: after the presentation of the Fit for 55 package, the legislative process has begun. First of all, proposed amendments will be deliberated and put to the vote. This will be followed by negotiations among the member states. Michael Bloss – a Member of the European Parliament from the group of the Greens/European Free Alliance since 2019 – is fully involved in this process. In this interview with eco@work, he reports on the opportunities for social justice in climate policy, the courage to take ambitious steps, and negotiations with Polish conservatives.

Michael Bloss, what is your assessment of the Fit for 55 package?

It is the most ambitious climate package ever, and it is all-encompassing – and of course, that is a very good thing. At the same time, there are a few points where it needs to be improved. For example, the social and international dimensions have not really been considered, and many issues have been put on the backburner. We should be starting with very high CO2 reductions right away.

How is the process shaping up?

Many member states were keen to start by scaling down; they wanted to reduce the level of ambition, partly because of of the war in Ukraine. This is the major question at the political level: will we manage to maintain or perhaps even improve the package’s level of ambition? To make this the major and historic package that it really should be, we will have to fight for many of the proposals.

Where do the social aspects fall short?

The focus is almost exclusively on emissions reductions and economic growth. Granted, cash from the emissions trading system for buildings and transport is to go to the Social Climate Fund, mainly to support member states with a lower income level. But that’s far too little; in reality, the full amount of income should flow into the Fund. Perhaps the cash will indeed be used to deliver meaningful programmes. However, there is also a risk that the national governments will not concern themselves with the social dimension and will spend the money on courting popularity with voters instead. Incidentally, I don’t think it is particularly socially minded to expect the public to pay a carbon levy when industry is still receiving allowances free of charge.

How could the international dimension be improved?

An initial and important step would be to actually honour our financial pledges to the Global South. But of course, it is also about meaningful investments in these countries, and it is about partnerships and energy transfers. Trade policy should also be restructured so that it makes a contribution to curbing the climate crisis.

Until now, trade agreements have viewed climate provisions primarily as a restriction on trade. That needs to change. This is where the carbon border adjustment mechanism (CBAM), proposed in the Fit for 55 package, can help. It integrates products’ carbon footprint into trade policy by imposing a carbon price on imports. However, there also needs to be some form of social compensation for poorer countries so that they can initiate effective decarbonisation strategies, focusing, for example, on strengthening internal trade and local economic cycles in Africa.

A higher level of ambition is needed due to the war in Ukraine as well.

Absolutely. Unfortunately, there is a lot of movement in the wrong direction at present. Buying oil and gas in Qatar and building LNG terminals is not a solution. Everything possible must now be done to accelerate the exit from fossil fuels. Here, I am thinking of how heating systems can be made more efficient, with options such as installing heat pumps in basements and solar panels on rooftops, or rapidly progressing the energy upgrading of buildings.

What is the current parliamentary arithmetic in terms of opposition to and support for the package?

It is a very dynamic and exciting situation, with many different majorities that can and should be mobilised. And there are some surprises along the way: for example, the Polish conservatives voted with us for an ambitious climate target. This was probably because they sit on the Opposition benches alongside three Green MPs in the Polish Parliament. We are very numerous and we are very diverse. And that is Europe’s defining feature as well.

Michael Bloss studied International Relations at TU Dresden and then completed a Master’s in Globalisation and Development at the School of Oriental and African Studies (SOAS) in London. Before being elected to the European Parliament for the Greens/European Free Alliance (EFA) group in 2019, he was a political adviser in the EP from 2014 to 2018 and also worked in the State Parliament of Baden-Württemberg. In the European Parliament, Michael Bloss sits on the Committee on Industry, Research and Energy and the Committee on the Environment, Public Health and Food Safety.

In addition, the Green politician was involved in drafting the coalition agreement for the CDU/Green government in Baden-Württemberg, with a focus on energy, the environment and climate, and is a member of the Baden-Württemberg party executive.

Climate policy in the EU has never been more ambitious: the Fit for 55 package is intended to enable the EU to reduce its…

Carbon dioxide (CO2) pricing has existed for some time: some producers of CO2 emissions have been required to purchase carbon…