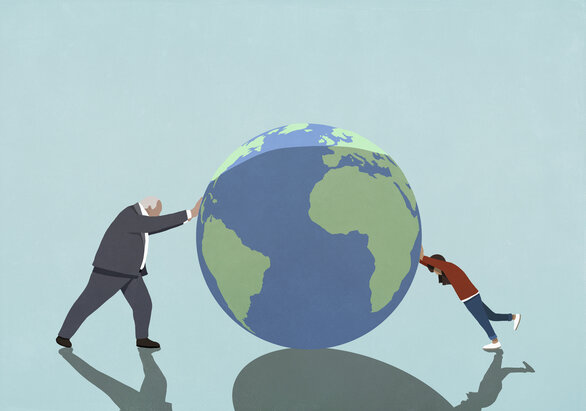 Climate policy in the EU has never been more ambitious: the Fit for 55 package is intended to enable the EU to reduce its greenhouse gas emissions by at least 55% by 2030 compared to 1990 levels, as envisaged in the European Green Deal. The target is backed by challenging plans for all sectors. The package has been welcomed by many, including the Oeko-Institut, which views it as an important and ambitious step. But can emissions really be reduced so drastically in less than a decade? Which of the Commission’s proposals are realistic, and where is there a need for improvement? These questions are being addressed in various Oeko-Institut projects.

The Fit for 55 package was presented by the European Commission in July 2021. After scrutiny by the Council of the European Union and the European Parliament, representatives of these two institutions and the Commission will meet in trilogue to discuss and negotiate possible amendments, with initial decisions to be adopted in 2022.

In addition to more ambitious climate targets, the Fit for 55 package includes proposals on regulatory and market-based instruments. “Among other things, the Commission is keen to boost energy efficiency in the EU, accelerate the expansion of renewable energies, establish more stringent emissions standards for passenger cars and integrate land use into climate change mitigation,” says Sabine Gores, a national and European climate policy expert at the Oeko-Institut. “There are also plans to extend emissions trading to new sectors and improve the existing Emissions Trading System.” (For more information on emissions trading, see “Carbon dioxide costs” on p. 8.) The EU’s Effort Sharing Regulation – which addresses sectors not covered by the EU’s Emissions Trading System at present – will also be amended. “This is an extremely important instrument: previously, non-achievement of climate targets could simply be dismissed with a shrug of the shoulders, but now, it genuinely costs money,” Sabine Gores explains.

Among other things, since the war started in Ukraine, accelerated expansion of renewable energies has become an even more urgent issue as it offers the prospect of more independence from fossil fuel imports from other countries – notably Russian gas and oil. The Commission is proposing a 40% share of renewable energy sources in the overall energy mix by 2030 – raising the current target by 8%. There will also be sub-targets for various sectors, including transport, industry and buildings. “Here, the German government happens to have set a high level of ambition in the coalition agreement: it stipulates that new heating systems installed from 2025 onwards will have to be powered by a 65% share of energy from renewable sources.”

Boosting energy efficiency is a further way to reduce our dependence on fossil fuels. Here too, the Fit for 55 package sets more ambitious targets, almost doubling the required annual energy savings. As a further goal, public bodies will be required to renovate 3% of the floor space of their buildings annually to higher energy standards. “I can well imagine that the war in Ukraine has given fresh impetus to the discussions about renewable energies and energy efficiency and that the process will end with even more ambitious goals,” says the Oeko-Institut’s Senior Researcher.

The Commission also intends to increase the climate targets for sectors that are not covered by emissions trading at present and therefore fall within the scope of the Effort Sharing Regulation: buildings, transport, agriculture, waste and small-scale industry. They produce around 60% of Europe’s greenhouse gas emissions. The new reduction target for these sectors is at least 40%, instead of the current 30%, compared to 2005 levels. Depending on their starting points and capacities, different targets will be set for individual countries. “For Germany, this will amount to a 50% reduction in emissions from these sectors by 2030, instead of the current 38%.”

In addition, land use, land use change and forestry (LULUCF) will be integrated into the EU’s climate targets for the first time – and will thus contribute to the removal of carbon dioxide (CO2) from the atmosphere. The EU-wide target of net greenhouse gas removals in the LULUCF sector is 310 million tonnes of CO2 equivalent in 2030. In addition, absolute targets are planned for individual countries. “Unfortunately, the data on which these targets are based are not particularly robust,” says Sabine Gores. “This type of data is also difficult to collect because unlike coal burning, for example, where it is possible to calculate greenhouse gas emissions with a high degree of accuracy, the question of how much CO2 can be absorbed by the soil depends on factors such as how it is ploughed. Another key issue is the longevity of emissions storage in this sector. Avoiding emissions from the burning of fossil fuels is therefore most important and cannot be directly equated with carbon storage in the land use sector.”

Overall, Sabine Gores views the Commission’s Fit for 55 package very positively: “With this package, Europe is taking a major step forward. However, it must now be underpinned by higher standards and rules, with more stringent checks on how it is implemented,” she says. For example, since 2019, she has been working on the project “Achieving targets and increasing ambition in EU climate policy in both the medium (2030) and the long term (2050+)” for the German Environment Ministry, with a focus on more ambitious climate targets for Europe. The initial results may help to fill the Commission’s proposals with life. “We are looking at where there is scope to raise the level of ambition here in Germany and are producing qualitative and quantitative climate policy analyses. For example, together with the Ecologic Institute, we analysed the potential of natural sinks, such as forests, grassland and arable land, and how it can be maintained and improved,” says Sabine Gores. In the Working Paper “Options for Strengthening Natural Carbon Sinks and Reducing Land Use Emissions in the EU”, the project team shows that conservation of forests and afforestation offer the greatest potential for carbon sequestration. In order to avoid emissions from land use at the same time, the conservation and rewetting of organic soils are also important. “The assumptions about how much CO2 the EU net sink can actually absorb vary considerably. We consider an estimate of 400 to 600 Mt CO2 per year to be feasible for 2050.”

Rapid implementation and a long-term approach

In Sabine Gores’s view, Germany is generally well-prepared for the new targets. “In essence, Germany’s Federal Climate Change Act anticipated the Commission’s proposed targets. But now we need to move from intention to action at last, because achieving the targets will take time, especially where infrastructural measures are concerned.” For Sabine Gores, an energy and process engineer, this will require not only rapid implementation, but also a long-term approach. “In Germany, we aim to be climate-neutral by 2045. That is a major challenge and one which will require ongoing work. It means that the ambitions and goals must remain in place across election cycles and possibly also across governments and parliaments of different compositions.” The public must therefore be convinced of the long-term need for ambitious climate policy “so that they consider not only their own current wellbeing but also that of future generations”. At the same time, in light of the global political situation, Sabine Gores sees an unprecedented willingness to exit fossil fuels.

Europe aims to be the first climate-neutral continent by 2050

The Oeko-Institut is supporting the German Federal Ministry for Economic Affairs and Climate Action as the process continues. “For example, we are assessing progress towards the national and European climate targets and analysing whether additional measures are required and what they can achieve.” This should also form the basis for the next update of Germany’s national energy and climate plan (NECP), the final version of which must be available by mid-2024 and which describes goals, strategies and measures in climate policy. “All the member states are required to submit these reports,” Sabine Gores explains.

In the “Trends and Projections in Europe 2021” study for the European Environment Agency (EEA), Oeko-Institut researchers underline the need for decisive action at the European level as well: the climate policies and measures currently planned across Europe will lead to a net emissions reduction of just 41% by 2030. “The evaluation of the national energy and climate plans shows that without further efforts, the EU share of renewable energy will stand at 33% by 2030 – 7 percentage points below the Commission’s new target. And even the current energy efficiency target will be missed by almost five percentage points.”

Climate policy in the EU has never been more ambitious. Now it is up to the European countries to show that as well as being able to set ambitious goals, they can take long-term, resolute and courageous action to achieve them. When it comes to protecting the climate, there should be no more delays – for geopolitical reasons, but, above all, for the sake of the environment and society.

Energy and process engineer Sabine Gores has been working on climate policy for more than 20 years. As part of her research at the Oeko-Institut, she analyses European greenhouse gas emissions trends and develops scenarios on future energy consumption and emissions.

Up to date: More climate ambition in the EU and Germany needed now

Thematic web page: Climate protection in the EU: rules for agriculture and forestry

Blog article: Is the EU heating sector “fit for 55”?

Working Paper: Options for Strengthening Natural Carbon Sinks and Reducing Land Use Emissions in the EU

Publication: ‚Fit for 55‘: delivering the EU’s 2030 Climate Target on the way to climate neutrality

Report on the European Environment Agency (EEA) website: Trends and projections in Europe 2021

Carbon dioxide (CO2) pricing has existed for some time: some producers of CO2 emissions have been required to purchase carbon…

Now it is Parliament’s turn: after the presentation of the Fit for 55 package, the legislative process has begun. First of…

more
“Will we manage to maintain the package’s level of ambition?”