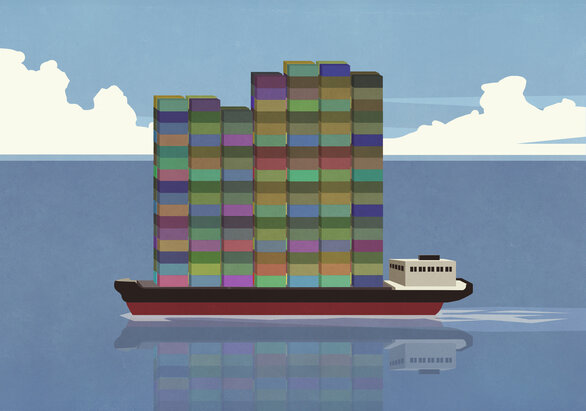 Carbon dioxide (CO2) pricing has existed for some time: some producers of CO2 emissions have been required to purchase carbon allowances via the EU Emissions Trading System (EU ETS) since 2005. However, not all producers of greenhouse gas emissions are covered by the scheme. The Fit for 55 package aims to redress the balance: by requiring maritime transport to pay for its emissions, ending the free allocation of allowances for aviation and introducing a separate emissions trading system for buildings and road transport. How effective are the Commission’s proposed changes and innovations likely to be? Where are bold amendments planned, and where is more ambition required?

The Commission is proposing multiple changes to CO2 pricing. The Oeko-Institut has summarised some of these changes in factsheets produced on behalf of the German Environment Agency (UBA); it has also formulated open questions for the further political process, focusing, for example, on the existing EU Emissions Trading System (ETS 1). “Here, the aim is to increase the level of ambition by reducing the cap, for example. The cap determines how much can be emitted in total,” explains Jakob Graichen, a Senior Researcher in the Oeko-Institut’s Energy and Climate Division. “The cap has already been continuously reduced, but the Commission would now like to accelerate this process. A one-off reduction of the cap by 117 million allowances is also planned.” In addition, adjustments are envisaged for the Market Stability Reserve (MSR), whose purpose is to reduce the existing surplus of allowances and better match supply and demand. “With the MSR, not much will change; I would have liked to see more ambition here,” says Jakob Graichen. On behalf of the German Emissions Trading Authority at the UBA, he has developed a calculator to simulate the behaviour of the MSR based on various assumptions. “If CO2 emissions are reduced more rapidly than expected, the Commission’s proposal would be too weak and the surplus of emission allowances would increase once more.”

On the water, in the air

Changes are on the horizon for the aviation sector as well, which has been covered by European emissions trading since 2013. “There is a cap here too, which will now be lowered more quickly than previously envisaged. There are no plans for a one-off reduction,” Jakob Graichen explains. “What’s more, the practice of allocating 85% of this sector’s emission allowances free of charge will end in 2027.” He is critical of the lack of regulation of other climate impacts of aviation, such as cloud formation. “Their climate impact is roughly double that of CO2 emissions.”

In addition, from 2023, the EU ETS is to be extended to maritime transport, which currently accounts for approximately 3% of the EU’s total CO2 emissions – roughly equivalent to Belgium’s GHG emissions. Shipping companies will then be required to purchase allowances for larger vessels (gross tonnage above 5,000). Allowances will have to be obtained for all voyages within the European Economic Area and 50% of voyages to or from third countries. “There are some exemptions – for fishing or fish processing vessels, for example – and inland shipping is not covered,” says Jakob Graichen. Overall, however, he regards this as “very substantial progress and one of the strongest elements of the Commission’s proposal”, as maritime transport was previously a blind spot in European and global climate policy.

Another key proposal concerns the introduction of a separate emissions trading system for buildings and road transport (ETS 2) from 2026, with allocation of emission allowances to be carried out entirely through auctions. The allowances will have to be purchased by distributors of fossil fuels. “After all, it would make no sense for everyone who drives a car or has a gas-fired boiler in their basement to take part in emissions trading.” The separation from the ETS 1 also makes sense, in Jakob Graichen’s view. “With ETS 1, we are finally at a point where the ‘bugs’ which affected the system in the past have been ironed out. Integrating new sectors could put that at risk.”

In principle, it is important, of course, to consider transport and buildings, given that climate action in these sectors has been far from adequate so far. “But the ETS 2 cannot solve the problems in these sectors on its own; it can only support other policies,” says Jakob Graichen. “What we need as a matter of urgency is accelerated energy upgrading of buildings and fewer combustion engines on the roads, for example.” He believes that regulation – such as banning the installation of new gas heating systems or introducing more stringent efficiency standards for buildings – would lead to much more progress in these sectors. And as he points out, it is unclear how the ETS 2 will affect the carbon price of heating and motor fuels, introduced in Germany under the Fuel Emission Allowance Trading Act (Brennstoffemissionshandelsgesetz – BEHG) in 2021. “The BEHG covers energy consumers who would not fall within the scope of the ETS 2, and that is quite rightly criticised. The ETS 2 should be expanded to include all forms of energy consumption.”

From 2023, emissions trading is to be extended to maritime transport.

In terms of its social impacts, an EU-wide carbon price is a potentially explosive issue, says Jakob Graichen: tenants, for example, have no influence over issues such as the thermal insulation or type of heating installed in their building. “As the impacts of the ETS 2 are likely to be felt mainly by lower-income households, there are plans to set up a Social Climate Fund, which will receive around 25% of the revenues from the ETS 2. Which member states will receive funding for climate-related social programmes, and how much, will be determined by factors such as the number of people at risk of energy poverty,” Jakob Graichen explains. “It’s a good approach – but can it work? That’s not entirely clear.” Indeed, it is far from certain that the ETS 2 will be introduced at all. “Many member states, including Germany, are critical of the Commission’s proposal.”

The Commission has also addressed the often-criticised free allocation of emission allowances to industry. “It has been argued that without continued free allocation of allowances to Europe’s steel industry, for example, production would be relocated to countries where there are no climate policy measures in place,” Jakob Graichen explains. “So there is now a proposal to introduce a carbon border adjustment mechanism (CBAM), with CO2 pricing of imports.” Countries which are already covered by an emissions trading system would be exempt. The carbon border adjustment mechanism would be introduced stepwise and is not without its challenges. “In an ideal scenario, it would be possible to trace every tonne of imported steel back to the factory where it was produced and determine the specific CO2 emissions from that factory,” says Jakob Graichen. “The CBAM should ideally encourage other countries around the world to introduce emissions trading.”

Another positive point, he says, is the energy tax reform, which is also on the table. “Here, the tax rates should reflect the energy content and the environmental impact, for example – that would finally spell the end for the lower rates of tax on diesel. And kerosene would be taxed at last as well.” However, the Senior Researcher is not optimistic that these plans will be implemented. “That’s partly because changes to tax law must be agreed unanimously.”

Jakob Graichen and his colleagues will continue to be involved in the Fit for 55 process. For example, the Oeko-Institut has formed a consortium with Ricardo-AEA from the UK and Austria’s Environment Agency to monitor the negotiations and legislative process and support the Commission by providing analyses and assessments. The researchers – together with Fraunhofer ISI and DIW Berlin – are performing this task at national level as well: they are providing advice to the German Emissions Trading Authority at the UBA and to the German Environment Ministry, sharing their scientific expertise and, above all, conducting economic analyses. On the face of it, the concept of a carbon price might seem quite simple. But a closer look at how it is collected and what impact it may have reveals a very different picture.

Graduate physicist Jakob Graichen works on a broad range of national and international climate policy issues at the Oeko-Institut, including emissions trading systems and quantification of greenhouse gas emissions. Climate-neutral aviation and shipping are a further focus of his work.

Blog article: How to design an EU emissions trading system for maritime transport?

Publication: ‚Fit for 55‘: delivering the EU’s 2030 Climate Target on the way to climate neutrality

Factsheet on the German Environment Agency (UBA) website: Introduction of a Carbon Border Adjustment Mechanism (CBAM) in the EU

Climate policy in the EU has never been more ambitious: the Fit for 55 package is intended to enable the EU to reduce its…

Now it is Parliament’s turn: after the presentation of the Fit for 55 package, the legislative process has begun. First of…

more
“Will we manage to maintain the package’s level of ambition?”