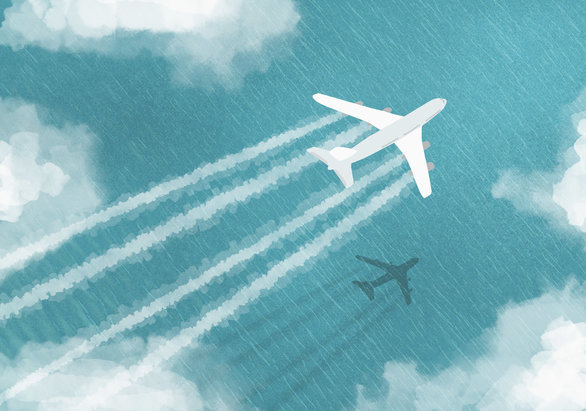 When a plane takes off in Frankfurt for New York, a journey that is particularly climate-damaging begins: in the course of the return flight, each passenger causes global warming equivalent to the impact of almost four tonnes of CO2. It would take a car journey of 21,900 kilometres to generate the same emissions. In other words, no form of transport is as damaging as the aeroplane. Despite this, air travel has increased steadily over the years and no effective policies are being put in place to reduce the greenhouse gas emissions of the aviation sector. In its current donation-funded project the Oeko-Institut has looked in detail at climate change mitigation in aviation. This has included analysing and evaluating regulations and subsidies in the industry.

Some people may perhaps regard the direct emissions of aviation as negligible – they account for around 2.5 percent of global CO2 emissions. But this fails to take account of non-CO2 effects. “Unlike vehicles such as a car or motor bike, aircraft release their emissions ten kilometres above the ground – which means that they have a far more damaging effect on the climate,” explains Jakob Graichen, Senior Researcher at the Oeko-Institut. “Aircraft contribute to cloud formation and have complex impacts on the climate: the contribution of their emissions to global warming is three times that of ‘normal’ CO2 emissions from the combustion of fuels.” Moreover, because the non-CO2 effects are significant only at higher flying altitudes, the harmful effect of aircraft on the climate is far more severe on long-haul routes than on short-haul ones.

In addition, air travel has been steadily increasing – by 4-5 percent annually in recent years. Before the Covid-19 pandemic, further strong growth was predicted. For example, the German Aerospace Center (DLR) projected at the end of 2019 that worldwide passenger numbers would rise from around four billion in 2016 to more than nine billion in 2040. “The pandemic caused a huge collapse that will remain noticeable in the coming years,” says Graichen. “The number of business trips is likely to reduce – now that we have found that video conferencing is a convenient and genuine alternative.” The researcher from the Energy & Climate Division also anticipates that in the short term people will plan fewer long-haul holidays and will be more likely to holiday in their own country. “However, I don’t believe we will see a permanent change in travel behaviour,” he says. “We can assume that in a couple of years tourism will return to something like the pre-2020 situation and that aviation will increase again – with all its negative consequences.”

AT THE START OF THE ROAD

The aviation industry needs to become climate-neutral by 2050 if climate targets are to be met. Yet how the sector can achieve this is still not entirely clear. “It is true that there have been improvements in energy efficiency, but they are nowhere near enough to offset the growth in flying, let alone reduce greenhouse gas emissions,” says Jakob Graichen. Alternative drives, too, are regarded by the senior researcher as still some way off. “Short-haul flights could become electrically powered in the medium term: Norway is planning to introduce electric aircraft by 2040,” he says. “For long-haul flights, synthetic fuels are the most likely climate-friendly option, because they can be produced using renewable energies.” But the expert also stresses that these fuels will not achieve rapid emissions reductions in aviation. “At the moment they are still significantly more expensive and in some respects the technology is not yet mature. It will take decades for global infrastructure and production capacities to reach an appropriate level,” says Graichen. “To evaluate the potential it is also helpful to make a comparison: if all the world’s aircraft were to operate on climate-friendly e-fuel today, the world’s entire production of renewable electricity would have to be used solely to power aircraft.”

And while there is still much to be done on the technical side, national and international policy-makers are also not doing enough to improve climate change mitigation in aviation to the extent that would already be possible today. Quite the opposite: the sector is heavily subsidised. “The price of flying is kept artificially low,” explains Graichen. “For example, there is no value-added tax on international flight tickets and no taxation of aviation fuel – when the fuel used by all other modes of transport is taxed.” Through the exemption from energy tax Germany alone subsidises aviation to the tune of eight billion euros per year; EU-wide the subsidies amount to around 27 billion euros. The VAT exemption costs Germany around five billion euros, while the cost to the EU is around 30 billion. “Moreover, this mainly benefits people on higher incomes, because they fly more frequently.” The senior researcher believes that it is time to treat aviation in the same way as every other sector for tax purposes – by levying VAT or imposing a significantly higher ticket tax, especially on medium-haul and long-haul flights. “If it becomes more expensive, fewer people will fly,” says Graichen. “However, introducing a kerosene tax would provide an even better incentive to protect the climate, because it increases the cost of using energy and thus directly incentivises moves to reduce emissions.”

As part of the donation-funded project “Above the clouds or staying on the ground?” the Oeko-Institut has analysed various aviation regulation measures and their emissions and evaluated their (possible) contribution to climate change mitigation. For example, intra-European aviation is part of the EU emissions trading system (EU-ETS). Yet Jakob Graichen regards this instrument as having very little effect on the sector. “For one thing, the emissions trading system has only a very limited sphere of influence and it covers only CO2 emissions and not the indirect climate impact of flying,” he says. “In addition, the aviation industry receives many of the certificates free of charge for no justifiable reason.” This is because EU-ETS certificates can be issued for free if there is a risk of “carbon leakage” – i.e. of a climate-damaging activity migrating to a non-EU country. “But in aviation the passengers do not migrate. They want to continue flying from home,” says the researcher. “The free allowances should therefore be abolished to create stronger incentives to reduce emissions.”

Jakob Graichen also has clear views on CORSIA, the Carbon Offsetting and Reduction Scheme for International Aviation managed by the International Civil Aviation Organization (ICAO). “It doesn’t work,” he says. The scheme is supposed to stabilise emissions, since from 2021 airlines will be required to purchase offsetting certificates from climate change mitigation projects if their emissions exceed a baseline level. “This baseline was originally going to be defined on the basis of average emissions in 2019 and 2020,” explains Jakob Graichen. “The aviation industry would of course like these baseline levels to be as high as possible. This spring, as aviation collapsed as a result of the Covid-19 pandemic, the industry argued that 2019 alone should be defined as the baseline year. The airlines feared that the very low level of aviation emissions in 2020 would cause the baseline to be set particularly low and require a very large quantity of emissions to be offset.” The Council of ICAO, supported by EU member states, accepted this point of view and defined 2019 as the baseline year.

However, the Oeko-Institut believes that aviation emissions will remain significantly below the originally assumed level for some time. This is one of the conclusions of the brief analysis titled “Should CORSIA be changed due to the COVID-19 crisis?”. “The aviation industry has been hit significantly harder by the pandemic than other sectors. We assume that it will take some time for it to return to pre-crisis levels,” says Graichen. After previous crises such as the Gulf War and the financial crisis of 2008, this recovery took two to six years. “CORSIA would therefore have made very little difference to the offsetting requirements: the effects of the lower baseline and the lower emissions would have counterbalanced each other,” says the senior researcher. He stresses that CORSIA had significant weaknesses even before these changes. “The system only addresses the growth in emissions, covers only some of the global emissions, and the quality of the permitted offsetting certificates is questionable. For example, forestry projects only need to guarantee that the forest remains standing for around twenty years. In its present form, CORSIA does nothing for climate change mitigation.”

Does this then mean that there is no hope of action on climate change in the aviation industry? Not entirely, says Jakob Graichen. There is some movement among policy-makers. In November 2019, nine EU member states – including Germany – expressed support for higher taxation. The European Commission plans to address the tax exemptions for kerosene as part of its Green Deal. “A proposal for a revision of the Energy Taxation Directive is due to be on the table by June 2021,” says the senior researcher. “All previous revision attempts have failed, partly because there has to be unanimity on tax law and some countries always object. Perhaps there will now be a more successful attempt – or an ‘alliance of the willing’ that would involve member states reaching agreement on kerosene taxation bilaterally.”

When a plane takes off from Frankfurt for New York in future, this could make the price of the ticket quite a bit more expensive. Until now, flying has been inappropriately cheap. Sensible taxation and an effective emissions trading system are essential. “Personally I am not an out-and-out opponent of air travel,” says Jakob Graichen, “but we do now need more thorough measures to curb unlimited growth, reduce air travel and make it climate-neutral.”

Jakob Graichen is a Senior Researcher in the Oeko-Institut’s Energy & Climate Division. He studies policies and measures that could reduce aviation and shipping emissions. The physicist is also working on the EU’s Green Deal and on refinement of the European Emissions Trading System.

Publication: Should CORSIA be changed due to the COVID-19 crisis?

Article in the Oeko-Institut’s Blog: Changes in course needed for UN scheme to address aviation emissions

Press release: Climate action in the aviation sector under threat

Thematic web page of the European Commission: A European Green Deal. Striving to be the first climate-neutral continent

Thematic web page of the Federal Ministry for the Environment (BMU): Luftverkehr

A 22-hour train journey instead of a three-hour flight? Most people would regard taking the train from Berlin to Barcelona…

The tickets are cheap and the next attractive destination is not far away: for many people, a flight to a European city was…

more
“Jetting around the world is no longer trendy and cool”