Towards a circular economy 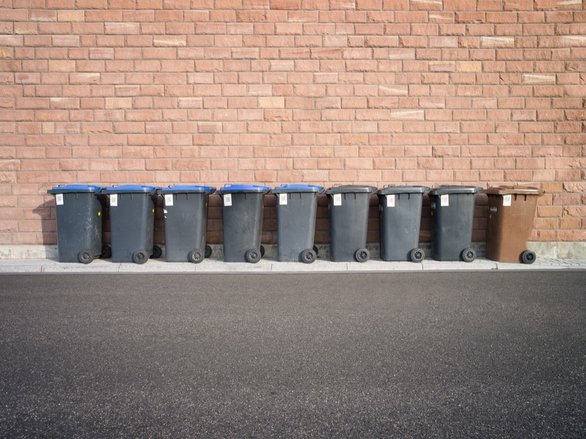 Recycling and reuse have a long history in Germany. A nationwide system of bottle banks for waste glass collection has existed since 1974. The Green Dot scheme and Dual System Germany (DSD) marked their 25th anniversary in 2015. Paper recycling rates doubled from 40.2 per cent in 1990 to 81.6 per cent in 2014. Progress, certainly – but it’s still not enough. When it comes to waste management, there are still plenty of challenges to solve, as the Oeko-Institut researchers know only too well: they are engaged in numerous projects on waste disposal, recycling and reuse. Their work focuses particularly on better use of the valuable resources found in waste and also, at present, on the new proposal for a Secondary Resources Act. A working draft of the law was unveiled by the German Federal Ministry for the Environment, Nature Conservation, Building and Nuclear Safety (BMU) in October 2015.

In 2013 alone, Germany produced more than 600 kilos of municipal waste per capita. It consisted of various waste streams: domestic waste and bulky refuse, bio- and green waste, electronic appliances, packaging and so on. In 2013, 63.8 per cent of Germany’s municipal waste was recycled or composted. That was the total: the percentage being appropriately recycled differed considerably across the various waste streams. More than 50 per cent of bio-waste was recycled, and for glass and ferrous metals, the figure was around 90 per cent. Predictably, the rates were much lower for bulky refuse (53 per cent) and plastics (around 30 per cent). “A key prerequisite for high-quality recycling is separate collection of the recyclable waste fractions,” explains Günter Dehoust, Deputy Head of the Infrastructure & Enterprises Division at the Oeko-Institut and an expert in waste management. “If recyclables end up in the domestic waste bin, as so often happens with plastics even now, they are likely to be a lost cause for resource conservation. The recycling rates, and especially the amounts being collected via the Dual System, can and must increase, and this applies particularly to plastics.”

Better waste sorting and recycling can have a positive effect on the climate as well, according to a study by the Oeko-Institut on behalf of the Federation of the German Waste, Water and Raw Materials Management Industry (BDE). The study, entitled Contribution of recycling management to the energy turnaround, shows that more waste should be recycled and less should be burned. “Plastics in particular are manufactured from oil, so when they are incinerated in inefficient base-load power plants, they produce high carbon emissions, which will not be offset by relevant benefits in future,” says Günter Dehoust. “We need to recover more plastics through collection, sorting and processing: according to our scenarios, this has the potential to cut CO2 emissions by more than a million tonnes.” He is convinced that in future, waste incineration should be used solely for the disposal of toxic waste that is unsuitable for high-quality recycling.

In the study, published in January 2014, the Oeko-Institut researchers propose the rapid introduction of a uniform bin for recyclables, with ambitious quotas – a model which now features in the draft of the new Secondary Resources Act. But the Oeko-Institut researchers were working on the issue of recyclables long before the draft legislation came into being. Back in 2011, for example, they collaborated with Team Ewen on a simulation to reform the Packaging Ordinance. On behalf of the German Federal Environment Agency, stakeholders from the German states, municipal authorities and the waste disposal industry came together with business representatives, manufacturers and environmental and consumer organisations to assess two models for a single system for the collection of recyclables, with a focus on feasibility, practicability and impacts. “One model looked at handing over all the responsibility to the private sector,” says Günter Dehoust. “The other was based on a division of labour between public sector waste disposal services, manufacturers and distributors.” Despite some concerns on both sides, the results of the simulation showed that both options are viable. “All the participants agreed that we need ambitious recovery of recyclables, with high-quality recycling systems for these materials. To achieve that, the loopholes in the Packaging Ordinance must be closed and all types of packaging should be integrated into the system.”

The BMU’s working draft of a new Secondary Resources Act is an important step in this direction. The yellow bin will become the recyclables bin and will also be used to collect non-packaging made from similar materials, such as plastic spoons and metal pans. “Many people are already using their yellow bins in this way,” says Günter Dehoust. “The new legislation turns this intelligent error into good practice.” He describes the proposed substantial increase in the plastics recycling quota – from the current 36 per cent to 72 per cent – as ambitious and welcome. “The baseline for the quota is the quantity of plastics licensed in the future system,” he explains. “Product responsibility, which already exists for packaging, will be rolled out to cover a large number of metal and plastic items. The working draft of the new Act also successfully closes the licensing gap.” In order to fulfil the ambitious quota, all waste industry stakeholders will have to “optimise their systems across the board” – which includes setting up modern sorting and processing plants and developing new solutions for materials for which there is currently no recycling system in place, such as the PET containers increasingly being used for retail of sausage and cheese. As a support measure, says Günter Dehoust, the licence fees for types of packaging which cannot yet be recycled should be substantially increased. “Ultimately, what the general public needs is access to clear and comprehensible information, combined with a nationwide charging system based on the polluter pays principle, in order to reward people for separating their waste. This creates an important incentive for recycling,” he says. “It’s the only way to increase the volume of recyclables to the necessary extent.”

But packaging is not the only area of waste disposal in need of improvement: progress is needed on bio-waste as well. “Its potential is certainly not being utilised to the full,” says Günter Dehoust. “According to Germany’s Closed Substance Cycle and Waste Management Act, there should now be a nationwide system in place for separate collection of bio-waste, starting in January 2015. We generate 10 million tonnes of bio-waste annually, but a good proportion of that is still not being recycled: the figure is closer to five million tonnes.” One problem is the existence of numerous optional exemptions. “For example, you can choose to compost bio-wastes in your garden, but that’s only a partial substitute for the bio-waste bin because many people don’t make full use of this nutrient source,” he says. How can recycling of bio-waste and green waste be improved? That question is answered in guidelines produced by the Oeko-Institut experts in conjunction with the Institute for Energy and Environmental Research (ifeu), IGLux GmbH and Ressource Abfall GmbH for Baden-Württemberg’s Environment Ministry. “Key steps include nationwide collection based on bio-waste bins, an attractive system that takes account of users’ needs, and a network of collection centres where the public can hand in their woody garden waste,” says Günter Dehoust. As the first step, all bio-waste and non-woody green waste such as leaves and grass cuttings should be used to generate biogas.

Alongside private households, companies and producers have a key role to play. “In 2013, Germany generated around 57.1 million tonnes of industrial waste – that’s at least 10 million tonnes more than in 2003,” says Günter Dehoust. On behalf of the Federal Environment Agency and in conjunction with Oetjen-Dehne & Partner Umwelt- und Energie-Consult GmbH, the Oeko-Institut has studied the effects of more intensive recycling of industrial waste streams that are currently being disposed of in mixed waste. The project team looked at ways of easing the burden on the environment. “Mixed industrial/municipal waste contains valuable resources which are rarely recycled at present,” says Günter Dehoust. He is convinced that there is scope to boost the recovery of recyclables through mandatory pre-treatment. Direct incineration should be banned and sorting should be obligatory. “This would increase the yield of metals, plastics, cardboard and paper,” he says. The benefits can be enhanced through optimised recycling processes. The environmental balance sheet drawn up as part of the study shows that in combination with mandatory pre-treatment, these measures can have a very positive effect, especially on the climate. “There’s scope to increase the climate contribution at least fivefold,” says Günter Dehoust. Effective mechanisms, according to the researchers, include better in-company collection of recyclables, along with high-quality energy recovery from non-recyclable waste. It is also important to create sound investment conditions. “If we want waste management companies to invest in modern sorting plants, we must guarantee that recyclables are not channelled towards cheap disposal plants, bypassing these facilities,” says the Oeko-Institut expert.

THE STORY GOES ON...

As the examples of packaging, bio-waste and industrial waste show, the story of recycling in Germany is far from over. Much more effort is needed – from politicians and the public, but also from industry, particularly the waste management sector. “Our projects continually show that the conflict between private and public sector waste disposal must be resolved as a matter of urgency,” says Günter Dehoust. “If our waste management system is to evolve into a well-functioning circular economy, every stakeholder must contribute to its optimisation.” And as he emphasises, there may still be a happy end – but only if everyone works together. Christiane Weihe

Further information on external websites (in German only)

The circular economy in the EU

Waste policy is in good shape in Germany. It earns frequent and lavish praise from all sides: for its state-of-the-art waste… more