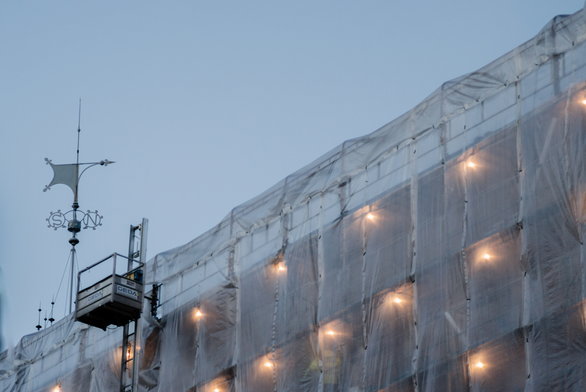 The present situation cannot continue: the building sector is heading for a substantial emissions gap. Under the Federal Climate Change Act (Bundes-Klimaschutzgesetz), this sector is required to cut its annual greenhouse gas emissions to 70 million tonnes of CO2 equivalent (CO2e) by 2030 – a 67 per cent reduction compared with the 1990 level. With the current package of measures, however, this target will be missed: a study led by the Oeko-Institut predicts a gap of almost 17 million tonnes of CO2e unless remedial action is taken. Experts from the Oeko-Institut’s Energy and Climate Division have already produced a number of studies showing where we stand with the heat transition and which instruments would still enable an almost climate-neutral building stock to be achieved.

“The heat sector is like a very large, cumbersome ship,” says Dr Veit Bürger, Deputy Head of the Oeko-Institut’s Energy and Climate Division in Freiburg. “To stop it running aground, you have to pull the rudder around early enough to give the ship time to change course.” For this Oeko-Institut scientist, that means taking action as soon as possible and certainly no later than the next legislative term, which starts in autumn 2021. “The gap, in terms of the climate target, is simply too wide.” Then there are the very long investment cycles in the building sector, with major refurbishments such as re-roofing or renovation of exteriors only carried out every few decades. “Added to that, there is a shortage of qualified craftspeople,” says Dr Bürger. “It’s another problem for which there is no quick fix: it takes several years of training to acquire these skills.”

But why has not enough been done in the building sector, given that heating and hot water account for more than 80 per cent of private households’ energy demand? Installing thermal insulation could reduce the heat demand of unrenovated properties by as much as 80 per cent. And the need for refurbishment is substantial: around 50 per cent of all detached and semi-detached houses have uninsulated exterior walls, and where insulation has been fitted, it often does not meet the required standard.

There are many reasons why progress on upgrading is slow, as Veit Bürger explains. “The energy transition has mainly focused on the electricity sector; this has been the case for some time, partly because transforming this sector is more straightforward and fewer decision-makers are involved. But in the building sector, we have more than 15 million property owners who have to be persuaded and motivated.” However, the coal phase-out, among other things, has increased the pressure to take action in the heat production sector. “When coal-fired power stations go offline, many heat and power cogeneration plants will be shut down as well. A substitute will have to be found for the heat that they currently produce, which is supplied to customers via district heating networks.”

An array of instruments, large- and small-scale, broad-based and specialised, can be used to progress the heat transition. “In essence, three elements come into play – incentives, imperatives and information,” says Veit Bürger. “We now have some good funding programmes and information campaigns, for example.” This year, the German government is providing more than 5.5 billion euros for renovation of buildings. The funding will go towards external wall insulation, window upgrading and the installation of new heating systems. “But even more financial support will be required in future.” The funding criteria will need to be adapted at the same time in order to create better incentives for more ambitious efficiency standards. For example, the government is still promoting the Efficiency House 100 model, the reference property which broadly corresponds to the current standard for new builds under the Buildings Energy Act (Gebäudeenergiegesetz). “But if we want to achieve the climate targets in the building sector, we will need to adopt the more efficient 40, 55 or 70 standards, meaning that a building will then utilise only 40, 55 or 70 per cent of the primary energy required by a similar reference property,” the Oeko-Institut expert explains. “The point is that most of the buildings that we live and work in today will still be standing in 2050. So we will only achieve the building sector’s climate targets if we build to rigorous standards and renovate our existing building stock with a high level of ambition today.”

Funding programmes can also play an important role if more stringent regulations are introduced, ensuring that all property owners who are obliged to carry out renovations have access to the required finance. “Far more action needs to be taken in the context of regulatory law, with triggers that get owners to start upgrading. For example, one option is to prohibit highly inefficient buildings from being rented out to new tenants after a certain cutoff point. Another is to require new owners who have purchased or inherited a property to upgrade it to a prescribed efficiency standard within a specific timeframe,” says Veit Bürger. “And an important point: in order to achieve an increasingly ambitious level of efficiency, the regulations must become more stringent over time.” A requirement to install solar panels on new builds and when re-roofing existing properties, already introduced in Hamburg and Baden-Württemberg, would also be beneficial, he says. “We urgently need these spaces for energy generation.”

Furthermore, since the start of 2021, greenhouse gas emissions from heating have been subject to carbon pricing; the starting price is 25 euros per tonne, rising to 55 euros in 2025. In the Oeko-Institut’s view, this mechanism needs to be developed further: “It is important to have a progressive increase in the price of CO2 and a simultaneous reduction in the price of electricity,” says Veit Bürger. The latter is necessary, he says, in order to increase the incentives for homeowners to install heat pumps – one of the key technologies in the heat transition. “The Heating Cost Ordinance (Heizkostenverordnung) should also state that in rental properties, the carbon price should not be borne solely by the tenants; landlords should also pay their share, as they are the ones making the renovation decisions.”

Prohibiting the use of fossil fuels for heating is also a sensible approach in the long term. “A ban on the installation of new 100 per cent oil-fired heating systems will come into effect in 2026; a similar decision is now needed for gas-fired heating as well.” Oil- and gas-fired boilers can also be combined with renewable energies, perhaps in the form of a hybrid heat pump. However, in Veit Bürger’s view, it is essential to ensure that the operating period for fossil fuel boilers is restricted to the coldest days of the year.

But a combination of imperatives and incentives is not the only viable option: blending information and incentivising elements may also be worthwhile in order to create synergies. In a building renovation passport, for example, energy advisers assess an individual property’s deep renovation needs and map each step in the refurbishment process. “If someone applies for a subsidy for just one element, such as re-roofing or replacement of the heating system, they should only be granted the funding if a building renovation passport is available,” the Oeko-Institut’s expert explains. “This avoids a situation in which individual elements of the refurbishment are carried out but may not be compatible with other upgrading measures further down the line.”

Roadmap for the heat transition

In the Systemic Challenge of Heating Sector Transformation project, commissioned by the German Environment Agency (UBA), the Oeko-Institut and its project partners – the Fraunhofer Institute for Solar Energy Systems (ISE) and HIC Hamburg Institut Consulting GmbH – focused in detail on the heat transition. “We developed a roadmap showing how refurbishment rates need to rise, at which point a ban on oil- and gas-fired heating should come into effect, and when district heating should be decarbonised,” says Veit Bürger. “Our starting point for developing the roadmap was the goal of a climate-neutral building stock.” The partners also looked at heating market stakeholders and considered the role of heating networks in the heat transition. In addition, the project team devised a package of instruments, consisting of legislation and funding schemes, that would facilitate implementation of the roadmap. As well as most of the policy instruments described above, its elements include consistent training and reskilling programmes in the crafts and trades, support for regional advice networks, minimum renewable energy quotas for heat network operators, adaptation of the regulatory framework for district heating, and obligatory heat planning for municipalities (for more information on this latter topic, see: Individual heating here, district heating there on p. 10).

A key question which has not yet been resolved, from this scientist’s perspective, concerns the future of the natural gas grid. “If gas-fired heating systems are banned, the gas distribution network, as an infrastructure, will gradually become redundant. Much too little attention has been paid to this issue so far, and that needs to change as a matter of urgency. The exit from this infrastructure must be approached strategically, so we need some ideas on how it can be regulated.” Many gas suppliers argue that in the long term, the network could be used for hydrogen. “But its availability is limited and hydrogen is far too expensive to use as heating energy. For that reason, the gas distribution network is likely to lose much of its significance over time.”

Sustainable transformation of the heating sector is a key area of Dr Veit Bürger’s work. A physicist and energy management specialist, he develops, assesses and evaluates appropriate policy instruments, with a focus on the energy renovation of the existing building stock and decarbonisation of the heat supply. In his projects, he also analyses the heat transition at European, national and regional level.

Article in eco@work magazine: Climate targets for 2030 – on the right track? Buildings – the immovables

Gas or oil? For a long time, these seemed to be almost the only heating options available. Today, there is much more choice.…

Ban construction! The title says it all: in 2015, Daniel Fuhrhop published an impassioned polemic against new builds.…

more
“Living space is a ressource”