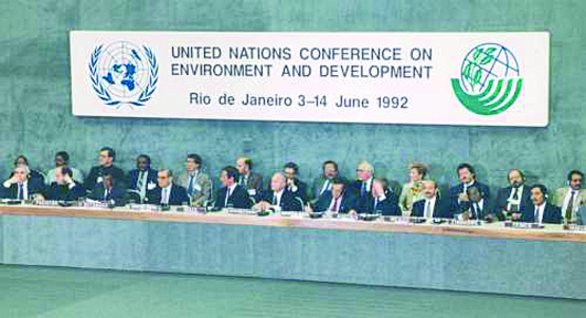 The Oeko-Institut is involved in the examination of the safety of Greifswald nuclear power plant by the Commission of East Germany’s Central Round Table. Subsequently all nuclear power plants in the former German Democratic Republic are closed and all construction projects involving such plants are halted.

1991: Opening of the Oeko-Institut’s Berlin office

1992: Prof. Rainer Grießhammer becomes a member of the German parliament’s Enquete Commission ‘Protection of Humanity and the Environment’.

Since then the Oeko-Institut regularly advises the European Commission and the German Federal Environment Ministry in various negotiating areas.

1995 onwards: Negotiations on the Biosafety Protocol

From late 1996 onwards: The CASTOR controversy

Michael Sailer, head of the Oeko-Institut’s Reactor Safety Division, publicly criticises the blockades of the CASTOR transports as counter-productive. The subsequent quarrel with the anti-nuclear movement reaches deep into the institute and results in members leaving.

1997: Publication of the product system assessment of washing and detergents on behalf of the German Environment Agency.

1997: Publication of the study of sustainability at Hoechst

1995 sees the start of collaboration with the chemical company Hoechst, which has been the subject of controversy within and outside the Oeko-Institut: the institute develops a management tool for a sustainable corporate strategy.

1998 onwards: Scientific support for the mediation process in connection with expansion of Frankfurt airport

1999: Study ‘Globalisation in the Pantry’

1999: Study of the nuclear transport scandal

The Oeko-Institut and the nuclear safety organisation GRS show that transport personnel and the general population could be at risk from the transport of contaminated nuclear waste.

1999: Establishment of the Legacy for the Future Foundation

1990: Launch of the Green Dot and the Dual System in Germany

Manufacturers participating in this recycling system use the Green Dot logo to show that their packaging can be placed in yellow sacks or containers for collection and recycling. The system quickly attracts criticism. Ever since its introduction the Oeko-Institut has been producing critical studies of the Green Dot and making suggestions for changes and improvements.

1990: First report of the Intergovernmental Panel on Climate Change (IPCC)

The Electricity Feed-in Act enters into force. Its provisions include the guaranteed purchase of renewable electricity and a fixed feed-in tariff. The ‘1000 roofs’ programme promotes the installation of photovoltaic systems.

1992: UN Conference on Environment and Development in Rio de Janeiro

Start of the UN negotiations on international controls on genetically modified organisms. However, the Biosafety Protocol is not adopted until early 2000.

The community of states, meeting in Japan, agrees the first ever limit on greenhouse gas emissions. However, the Kyoto Protocol does not enter into force until 2005, after it has eventually been ratified by Russia.

1998: Liberalisation of the electricity market

The numbers of suppliers and consumers of green electricity increase as a result.

»I have sometimes thought that I should move on. But there simply aren’t many jobs where the work is more interesting and where the ambience – the working conditions and the friendliness – is so good.«

»Basically there has been a certain paradigm shift: one could say that previously environmental policy was an afterthought. Then things moved on so that it is now about forethought. Of course it’s not as straightforward as that, but you could sum it up in those terms. And a paradigm shift of that sort – that takes time.

Christiane Friedrich, former member of the Oeko-Institut’s Executive Board