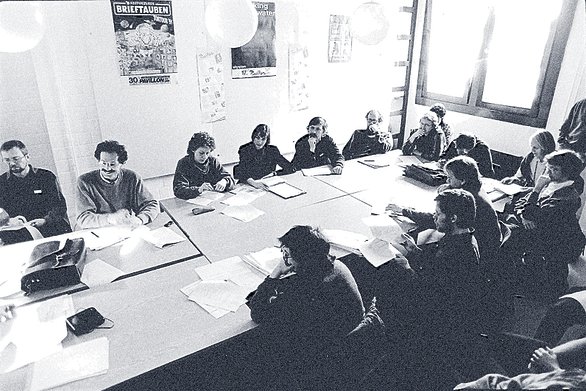 The Oeko-Institut’s groundbreaking ‘Energy Turnaround’ study shows how nuclear power can be phased out immediately and the use of oil can be halted by 2030 without jeopardising affluence and economic growth.

On behalf of the Federal Ministry of Education and Research, the Oeko-Institut investigates the ‘residual risk’ of light-water reactors.

1980: Establishment of the Oeko-Institut’s Darmstadt office

Rainer Grießhammer’s manual of environmentally aware behaviour remains in the SPIEGEL bestseller list for over a year and sells more than 250,000 copies.

Until 1997 the ICU is published monthly by the Oeko-Institut, the environmental and nature conservation organisation BUND and the national association of citizens’ environmental protection initiatives BBU; it reports on the risks of using chemicals and on policy-based solutions.

The study shows how the transition to sustainable energy can be effected and calls for the remunicipalisation of the energy sector.

1985: The Oeko-Institut decides to base its internal organisation on a divisional structure

1986: Creation of the Genetic Engineering Division at the Oeko-Institut

1986: The call for energy turnaround committees

After Chernobyl the Oeko-Institut calls for the founding of local energy turnaround committees – a success story: around 400 such committees are formed, carry on working for decades and help to drive the energy transition.

Study of genetic engineering and biological control of insect pests

The study focuses on the risks of genetic engineering in agriculture.

This method enables a product’s environmental, social and economic impacts to be analysed throughout its life cycle – a milestone five years before the Earth Summit in Rio de Janeiro, which in its final declaration calls for unsustainable production methods to be phased out.

1981: The discovery of forest dieback

Use of the headline ‘The forest is dying’ in Der Spiegel magazine triggers widespread public debate in Germany of the issue of forest dieback.

1983: The Greens obtain their first seats in the Bundestag

A disastrous chemical accident in Bhopal, India, causes the death of up to 25,000 people.

1985: Existence of an ozone hole over the Antarctic is proved

The nuclear power plant at Chernobyl in Ukraine goes into meltdown; large quantities of radioactive material are released across Europe.

1986: Creation of the German Federal Ministry of the Environment

An open valve and mistakes by the operating team almost result in meltdown of the Biblis A reactor.

How can environmentally sustainable development be combined with ensuring that the basic needs of people everywhere are met? This question is addressed by the United Nations World Commission on Environment and Development (WCED).

An oil tanker that runs aground off the coast of Alaska causes what is then the largest oil spill in history.

»The energy turnaround study laid the foundations for everything that subsequently had to be battled for step by step.«

Erika Romberg, politician and former member of the Oeko-Institut’s Committee

»I would never have thought that books such as the Öko-Knigge could have such an impact, doing more than imparting information and actually shaping many people’s fundamental decisions.«

»After the Chernobyl disaster, our phone at the Oeko-Institut was constantly ringing late into the night. We had to set up emergency services in an attempt to channel the calls. We wanted to give people information, but these were difficult times.«

Stephan Kohler, until the end of 2014 CEO of the German Energy Agency (dena)