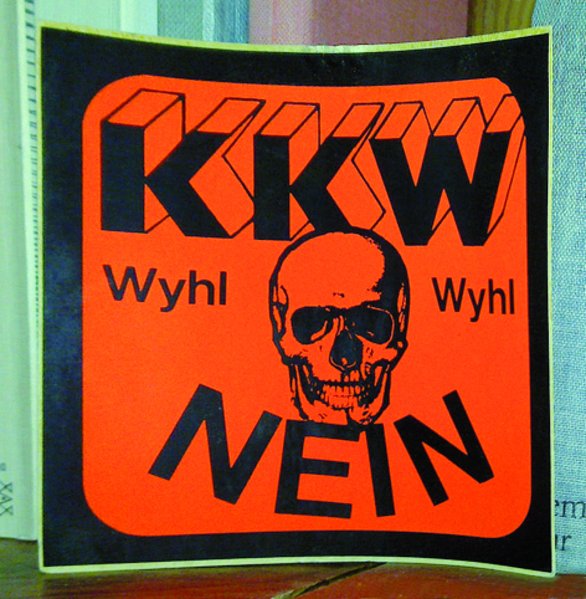 In 2017 the Oeko-Institut celebrates its 40th anniversary. On the following pages we look back at those forty years, commenting on pioneering studies undertaken by the institute, important milestones in our history and key changes in our structures, but also not forgetting what has happened in Germany and in the wider world during those four decades and what decisions and events – and sadly also disasters – have shaped and influenced our work. We also hear the voices of a number of supporters who note pivotal studies and projects and remind us how the institute has developed in the course of its ever-changing history.

The Oeko-Institut has achieved a great deal over the past 40 years: once a scientific rebel, it is now a recognised institution and an important advisor to policy-makers, industry and society. But the story doesn’t end there. Read about what the future holds, starting on page 11.

5 November 1977: Founding of the Oeko-Institut

As events associated with the proposed Wyhl nuclear power plant make clear, the environmental movement desperately needs independent scientific advice and sound expert opinions. The founding declaration states: ‘We know that today’s research helps to shape future living conditions. We can no longer leave this research to industry and the state. We therefore want to research alternatives for the future ourselves.’ The 27 founding members include lawyers working for the anti-nuclear campaign, members of various environmental movements, economists and representatives of the Protestant church.

In the early years the Oeko-Institut is funded largely by its members. The first issue of the members’ newsletter has a print run of 2,000 copies. It appears quarterly and profiles project activities.

At the initiative of the Social Democratic Party of Germany (SPD), the co-founder of the Oeko-Institut is appointed to the German parliament’s Enquete Commission ‘Future nuclear energy policy’ from 1979 until 1982.

The Kahl experimental nuclear power plant at Grosswelzheim in Lower Franconia is commissioned.

The target of the protests is the construction of the Würgassen reactor at Oberweser in the state of Hesse. Court proceedings result in 1972 in the ‘Würgassen judgement’ and thus in a U-turn in the case law on nuclear power.

1969: Founding of Friends of the Earth

The first international environmental organisation is an important partner in the early years of the Oeko-Institut.

A milestone in environmental legislation and a model for other countries: a National Environmental Policy Act (NEPA) is enacted in the USA.

Around 20 million people demonstrate in the USA in support of greater protection of the environment.

The ultimately successful non-violent protest against the nuclear power plant at Wyhl, near Freiburg in South Baden, marks the birth of the anti-nuclear movement in Germany. The protests also spark the founding of the Oeko-Institut.

The Council of Europe organises the first Europe-wide environmental campaign in its member states. The environmental discourse at European level begins.

1970: Bavaria creates a Ministry of the Environment

It is the first such ministry in Europe.

The Aviation Noise Act (1971) is the first in a series of new environmental laws for Germany. It is followed by the Waste Disposal Act (1972), the DDT Act, the Leaded Petrol Act and the Federal Emission Control Act (all 1974).

The Club of Rome publishes the environmental study produced by Dennis Meadows and others which highlights the finite nature of natural resources. It is considered a milestone in modern environmental awareness.

The world economy is severely shaken by OPEC’s oil embargo and the resulting sharp rise in oil prices.

The serious accident at the Three Mile Island nuclear power plant, with partial meltdown of the core, takes the USA to the brink of a nuclear disaster.

»But of course the Oeko-Institut stands out, simply because of its name. It is fantastic to be able to say ‘Oeko-Institut’ and not something complicated. You know straight away what it’s about.«

»The arguments over the Wyhl nuclear power plant were the trigger for the founding of the Oeko-Institut, because the campaigners believed that the experts on whom the state administration was relying were biased and pretending to proclaim an objective truth while in reality they had a point of view that was not in accordance with the facts of the situation.«