‘That’s what is needed. And it can be done.’

A conversation with Michael Sailer and Dr. Wiebke Zimmer 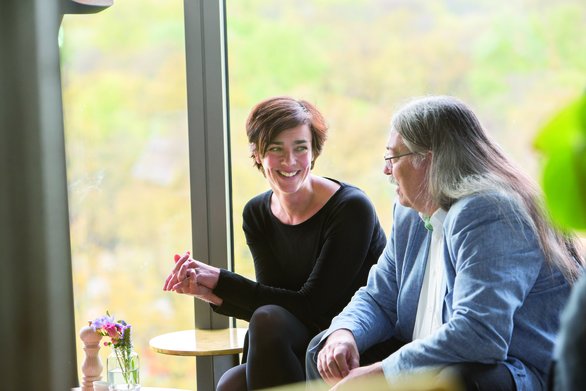 The Oeko-Institut has been looking into the future for the past 40 years – whether in connection with a sustainable energy supply or the search for a secure nuclear waste repository. But in what concrete ways are its researchers working for a sustainable future? What challenges do they need to overcome? We discussed these questions with Michael Sailer, CEO of the Oeko-Institut, and Dr. Wiebke Zimmer, Deputy Head of the Resources & Transport Division.

Michael Sailer, how certain are you when you make predictions?

Michael Sailer: That depends on whether we are talking about the basic outline or the details. In connection with the basic outline I am often certain, because we have a lot of experience there. But I don’t know how things will work out in future. Take Fukushima as an example: it was completely clear that sometime there would be another accident in a nuclear reactor and that it would happen in an industrialised country, because that is where the majority of reactors are.

What is the best way of dealing with an accident situation of that sort?

Sailer: We don’t want to stand there and say ‘We knew it would happen’. In addition, you have to have an eye on your own credibility. It was quickly clear to me that the clean-up work would take decades. But if I had said that a week after the accident, no one would have believed me. Sometimes I think, too, that we fail to emphasise facts or findings sufficiently so that politicians and the general public actually take them on board.

Sailer: We should have talked a lot earlier about the major economic challenges associated with the transition to renewable energy. In connection with the emissions trading scheme, we should have stated more clearly that CO2 certificates only make sense if they are expensive.

Wiebke Zimmer, what’s it like in the area in which you specialise, the transport sector? Do you have the feeling that you don’t point things out clearly enough?

Wiebke Zimmer: Not really. For example, we have been pointing out for a very long time that simply not enough is happening in this area. We keep emphasising that we shall miss just about all our sustainability targets if we carry on with business as usual.

When you draw up very ambitious scenarios, do you think it is realistic that they will actually occur?

Zimmer: I certainly think it’s realistic that transport will become more sustainable. But for that to happen, there must be a fundamental change in people’s behaviour and unfortunately it’s hard to predict whether people will change their attitude to the car. We must get away from a car-centred system. But politicians shy away from laying down strict rules for cars or making car use more expensive, because they fear it will lose them votes. Meanwhile things are moving to some extent in the industry because other countries are taking the lead, but the comprehensive structural change that is needed repeatedly meets with resistance.

How can things then be changed?

Zimmer: I am encouraged in particular by moves at local level that come from civil society – such as the Berlin bicycle referendum which has really got things going in Berlin on the cycling front and has shown politicians that reducing the privileged position of the car doesn’t have to mean that you lose lots of voters.

Sailer: And ultimately the energy turnaround, too, only succeeded to the extent that it did because there had for decades been popular movements pressing for things like that.

Zimmer: Within the Division we often ask ourselves where one can actually start. Two years ago I would still have said that you have to be part of a big project. Now I think that if you want visible acceptance by the general public, you need to make the vision of a liveable city tangible. You need to show people that their quality of life really is improved if there are fewer cars parked or on the roads and if there is more space for other things as a result. Then politicians may perhaps also have the confidence to introduce changes.

What can the Oeko-Institut do to make this vision come true?

Zimmer: The exciting thing is that wherever something is really happening, wherever great model projects are under way already, there is always someone on the administrative side who of their own accord is motivated to try to make this vision reality. For example in Bremen, where carsharing has received an enormous boost as a result.

Sailer: Our role is to stabilise movements like these. Often we are not particularly aware of it, but we help these people by enabling them to say that everything is scientifically proven. That’s what is needed. And it can be done.

Zimmer: It is also important that we have good contacts in many areas – in industry and politics, and also in associations, local government and civil society. This means that we can perform a networking role as well as utilising our scientific expertise.

Sailer: Yes, we bring people from all sorts of quarters together, for example at our annual conference in 2016, which took raw materials as its focal theme. This platform role is one of our key functions. It means that we enable people to talk to each other. And we have been very good at that for 30 or, indeed, 35 years.

You are committed to sustainability. How do you manage to keep that in the spotlight?

Zimmer: I think that we need to keep on demonstrating the goals that are linked to sustainability – fewer emissions, less noise, less consumption of resources, for example – and then create the right conditions. It also means closing the gap that is still there between what people consider important – such as action on climate change – and what they are prepared to do in support of it. Fortunately there is already a lot happening in many sectors in relation to climate change. We need more of that, backed up by economic incentives and also prohibitions.

Sailer: However, prohibitions only work in a climate in which they are also politically enforceable. The Oeko-Institut has often contributed to this climate. One must never give way to the pessimism that says that the world is terrible and has always been terrible and I can’t do anything about it.

How can this pessimism be tackled?

Sailer: You have to make people aware of it, talk about it. And above all emphasise the positive things. Our 40-year anniversary is a good example of that. In our anniversary year we look back on what has been achieved and see that we are a fantastic outfit. I believe that it means a lot to people – including young people – to be part of an institute that has already got so many things moving in pursuit of environmental quality.

By 2017
the EU should be spending three per cent of GDP on research and development.

From 2020
the International Energy…

more
The next decades

The world is going to change over the coming years, decades and centuries. Some developments we can already foresee, some…

If we could make a wish…

Oeko-Institut staff look into the future

more
If we could make a wish…