The Oeko-Institut’s Committee is newly elected 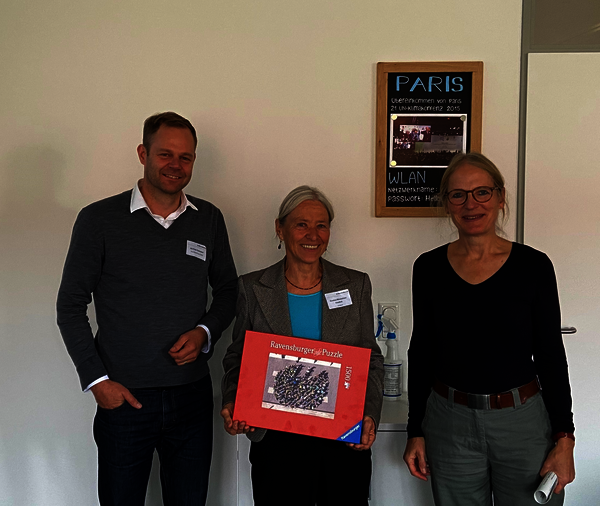 Honoring Dorothea Michaelsen-Friedlieb for her long service on the Commitee

The Oeko-Institut’s Members’ Meeting took place on Saturday, 24 September 2022, in a hybrid format, with members convening in the Berlin office or joining the event online. Second Chair of the Committee Ulrike Schell opened the proceedings by presenting an award to Dorothea Michaelsen-Friedlieb in recognition of her service on the Committee. Dorothea Michaelsen-Friedlieb, a Committee member for 25 years, was confirmed as its First Chair in the subsequent election. In addition, three Heads of Division gave presentations on special projects and key issues in their areas of work. The Committee elections were held after the report on the budget.

Alongside Dorothea Michaelsen-Friedlieb, Sebastian Backhaus, Wolfgang Renneberg and Vollrad Wollny were re-elected to the Committee. Helmfried Meinel was elected as a new member, replacing Susanne Dröge, who retired from the Committee in spring at her own request. We thank her for her good collaboration during her service on the Committee.

Other external members of the Committee are Ulrike Schell and Thomas Rahner. The internal members are Jan Peter Schemmel as Chief Executive Officer, Dr Martin Cames, who represents the extended management of the Institute, and Inse Warich (Darmstadt), Clara Löw (Freiburg) and Dr Roman Mendelevitch (Berlin) as staff representatives.

The Oeko-Institut extends its heartfelt thanks to all the honorary members of the Committee.

All about the Committee of the Oeko-Institut

Are you interested in joining the Oeko-Institut or making a donation to support our work? Find out more on our ‘Membership and Donations’ pages