LNG trucks: Not an option for climate protection 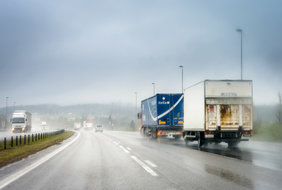 Most trucks running on liquefied natural gas (LNG) emit about the same amount of greenhouse gases as diesel trucks. Depending on the drivetrain technology, emissions from LNG trucks range between 969 and 1051 gCO2e/km; the figure for diesel trucks is close to 1060 gCO2e/km.

These high emissions are mainly attributed to methane – a greenhouse gas – which is released during natural gas combustion and in LNG production and refuelling and whose GHG impact is much higher than that of carbon dioxide (CO2), according to a new study by the Oeko-Institut and the International Council on Clean Transportation (ICCT) on behalf of the German Federal Environment Agency (UBA).

Moritz Mottschall, Senior Researcher in the Oeko-Institut’s Resources & Transport Division, sums up: “The widely held view that trucks running on liquefied natural gas (LNG) offer major climate benefits and should be subsidised as a bridge technology for decarbonising the road freight sector is no longer valid.”

As well as taking direct tailpipe CO2 emissions into account, the study includes methane and nitrogen oxide emissions from natural gas combustion, production and transport in the balance. Only taking direct CO2 emissions from natural gas combustion into account would produce a more favourable CO2 balance for LNG than for diesel trucks. However, if methane and nitrogen oxide emissions are included, a different picture emerges.

For example, the use of typical LNG vehicles with stoichiometric (SI) engines, which operate on what is known as the Otto cycle, produces 1051 gCO2e/km – broadly in line with diesel trucks, which emit 1056 g/km. Only LNG trucks which – like their diesel counterparts – are powered by compression ignition engines have lower GHG emissions: 969 gCO2e/km. The problem is that only one manufacturer supplies this type of vehicle; most LNG trucks do not fall into this category.

In Germany, road haulage companies can claim a purchase subsidy of €12,000 per LNG truck on the grounds that this type of vehicle contributes to GHG reductions. To date, the German government has provided more than €8.5 million in subsidies for 713 LNG trucks.

In addition, LNG trucks are exempt from the truck toll until the end of 2020 and benefit from time-limited energy tax relief. The study shows that government subsidies for a single LNG truck currently amount to as much as €74,000 over a five-year period. If the exemption from the truck toll is extended until the end of 2023, this would increase the total amount of the subsidies by a further €60,000.

The study’s authors conclude that the subsidies for LNG trucks should be phased out as planned, as LNG trucks have no relevant climate benefits. “The conventional wisdom that natural gas engines are much cleaner than diesel ignores the reality. From a climate perspective, they should therefore no longer be subsidised from the public purse,” says Moritz Mottschall.

Furthermore, biogas and synthetic methane are not available in sufficient quantities to power low-emitting LNG truck transport. The available potential of sustainable biogas covers only a fraction of current demand for natural gas. Demand for low-emitting biogas from other sectors, such as industry, will therefore far exceed the available potential of biogas. The study also concludes that it is unclear when and in which quantities sustainable synthetic methane will be available.

Study: Decarbonisation of on-road freight transport and the role of LNG from a German perspective, by the Oeko-Institut and ICCT