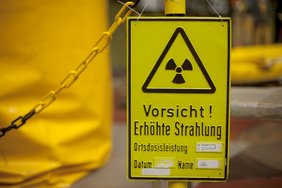 To what extent are nuclear facilities at risk in crisis areas? Which factors are of relevance in this context? Are policy-makers, the media and society around the world aware of the threat – and do they dismiss it too easily? These are just some of the questions explored by the Oeko-Institut in a study funded by the Legacy for the Future Foundation. It concludes that the safety of nuclear reactors in crisis areas may indeed be at considerable risk, not only from targeted attacks but also from political and economic instability and its impacts, combined with the weakening or even disintegration of state structures.

As well as being vulnerable to possible military attacks and deliberate acts of sabotage, nuclear facilities may be affected by conflicts, which can cause collateral damage to the industry’s extensive infrastructure and disrupt institutional control. An accident at a nuclear plant can unleash a chain reaction whose impacts are felt far beyond national borders. Mindful of this situation, the Oeko-Institut’s nuclear experts are keen to draw attention to this underrated but very real threat. Given the vulnerability of nuclear facilities and their dependence on a stable security infrastructure, a strategy which re-examines the concept of nuclear power generation in its entirety is required.

“The use of nuclear energy requires an extensive institutional and physical infrastructure. International or national conflicts can intentionally or inadvertently destroy this infrastructure and, in a worst-case scenario, this can cause a nuclear catastrophe,” says project manager Dr Veronika Ustohalova, an expert in radiation protection and risk assessment, explaining the background to the study. “Crisis countries have a multitude of problems to contend with, which means that appropriate nuclear safety measures and precautions cannot always be guaranteed.”

A nuclear facility may itself become a battleground if it is deliberately targeted or sabotaged or sustains collateral damage. What’s more, essential institutional control by the relevant authorities, the provision of training and payment of salaries to specialist staff, and technical and scientific support for nuclear infrastructure may be subject to massive disruption during a crisis.

Supply chains for replacement parts may also be affected. This is a major problem, particularly if the manufacturer and suppliers are located in another country – perhaps one of the conflict parties. The storage of high-level nuclear waste and the use of radioactive material pose another serious potential threat and are vulnerable to attack by militant or terrorist groups.

What if Ukraine loses control?

With reference to Ukraine, the Oeko-Institut’s experts warn that the link between international or national conflicts and nuclear safety is often ignored. “In just a few years, Ukraine has shifted from being relatively stable to becoming one of Europe’s dependent crisis regions,” is how Dr Veronika Ustohalova describes the situation. “What’s more, due to its strategic importance, the Ukrainian energy supply has already been the target of numerous armed attacks.”

In November 2015, for example, several electricity pylons on the Crimean peninsula were blown up in a deliberate act of sabotage, leaving 1.9 million people without power or with only a limited supply. The operation of Zaporizhia Nuclear Power Station was affected to such an extent that Ukraine’s national power company Ukrenergo described the situation as “extremely dangerous”.

It is only with massive financial support from other countries that Ukraine is currently able to implement safety measures at its nuclear facilities. However, the funding is having less of an effect than expected. “The government crisis, poverty and corruption make it much more difficult to implement any supportive measures. In this type of situation, neither the government nor the relevant authorities have the requisite full control over the country’s radioactive materials. In other words, the safe operation of the nuclear plants cannot be guaranteed to the necessary extent,” says Dr Ustohalova.

Also unresolved is the issue of the long-term interim and final storage of radioactive waste. The current agreement with Russia on the reprocessing of spent fuel rods expires in 2019. There are still no answers to the question of how Ukraine will manage its high-level radioactive waste in future. Construction of treatment and storage facilities for radioactive waste at Chernobyl, for example, is currently under way but is heavily dependent on substantial foreign investment.

The co-author Dr Matthias Englert, Senior Researcher at the Oeko-Institut and an expert in facility safety and scientific peace research, sums up the situation: “Ukraine’s energy dependency and the likelihood that it will continue to be reliant on nuclear power in future are worrying and require intensive efforts to improve nuclear safety.”

What is surprising, according to the Oeko-Institut’s nuclear experts, is the general lack of reporting or public debate about the potential threat posed by nuclear facilities in regions affected by instability and armed conflict. “The risks emanating from a disrupted nuclear infrastructure are often ignored. There also appears to be an assumption that as with the use of nuclear weapons, conflict parties will refrain from deliberately attacking nuclear facilities because to do so would break a taboo,” Dr Englert surmises. He hopes that “this new study will raise public awareness of the risks posed by nuclear energy, resulting in the adoption of necessary safety measures in cooperation with the international community”.