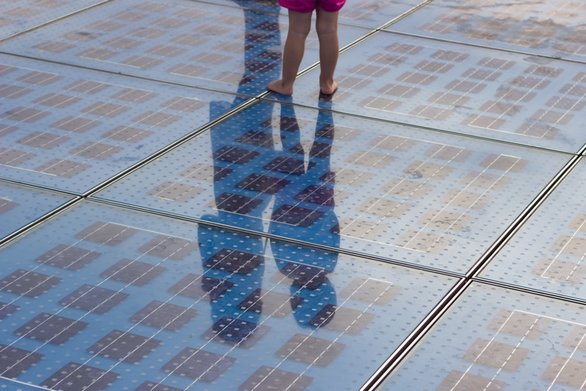 With the publication of the book Energiewende – Wachstum und Wohlstand ohne Erdöl und Uran in 1980, Oeko-Institut scientists sent a clear message: energy system transformation is within reach. Since then, a great deal has happened in Germany’s energy turnaround. Climate change has entered social and political consciousness – and requires wide-scale decarbonisation by 2050. The nuclear phase-out was agreed and then delayed, and will now be implemented by 2022. Renewable energies are booming, and greenhouse gas emissions have been cut, in some sectors more than others. Germany is on track towards a sustainable energy future, but faces problems and setbacks as well as progress and success stories. The aim is to achieve a fully sustainable energy supply by 2050. 2015 marks the half-way stage. But have we really reached 50 per cent of our goals?

“Given the major challenges we face, that’s difficult to measure. What is certain is that in some sectors, we could and should have achieved more in the last few years in order to stay on track,” says researcher Christof Timpe, Head of the Oeko-Institut’s Energy and Climate Division in Freiburg and Darmstadt. As he explains, progress on energy system transformation varies in the individual sectors – and so does the degree of optimism with which we can view its further implementation. “In the electricity sector, for example, we are well on track; here, we are much further ahead than in other areas. There is a relatively broad political consensus on the transformation goals in this sector, and most of the technologies required are available. Decarbonisation is well within reach here.” Of course, electricity generation is not without its problems. “There are some difficult decisions ahead,” says Christof Timpe, “notably as regards the construction of power lines and the future role of coal-fired power plants.”

There’s no disputing that much of the progress achieved in the electricity sector is due to the successful expansion of renewable energy sources (RES). According to provisional figures from the Working Group on Renewable Energy Statistics (AGEE-Stat), the share of RES in gross electricity consumption reached 27.8 per cent in 2014. And last year, for the first time, more power was generated from renewables (161 TWh) than from lignite (156 TWh) – compared with just 36 TWh from renewables in 2000. Renewable energies feature prominently in many of the Oeko-Institut’s projects, and a key issue is how they can best be promoted in future. Since 2000, guaranteed feed-in payments for RES electricity (RES-E) have been regulated by Germany’s Renewable Energy Sources Act (EEG), but the law will change yet again in 2016. “At present, installation operators receive a more or less fixed payment per kilowatt hour, comprising income from electricity sales and a floating market premium – irrespective of demand,” says Christof Timpe. “So if there is a surge in supply, even for a few hours, this can contribute to the formation of negative prices on the electricity exchanges.” A reform model – known as EEG 3.0 – developed by the Oeko-Institut on behalf of Agora Energiewende is therefore based on a fixed premium (capacity payment), among other things. “The key question is this: which system services does the plant provide? The premium should be calculated on that basis so that the producers of RES electricity share the risk posed by price fluctuations on the electricity exchanges,” says Christof Timpe. The model aims to smooth out fluctuations in power production as far as possible and thus reduce the need for flexibility. “But with the present model, maximising electricity production, not systemic gains, is the key focus of interest.”

Restructuring the transmission grids is also important in making energy system transformation a reality. “If the transition to an RES-based electricity supply is to be successful, grid adaptation is a must. At present, the grids are optimised for electricity generation in large power plants, but the energy turnaround will cause more fluctuations in power generation and create a multitude of local producers,” says Christof Timpe. “Flexibility is also needed, for example through load management at the level of consumers, as well as more heat and power storage.” But which specific flexibility options at which times and, above all, how much grid expansion will be needed? These are highly contentious issues. “There is considerable opposition to grid expansion. In our view, that’s partly due to the very complex process involved in producing the Grid Development Plan, which the public finds difficult to follow,” says Christof Timpe. “The plan is produced annually and describes grid expansion for the next 10 years.” An Oeko-Institut project on Grid Transparency – Ensuring Greater Transparency on the Need for Grid Expansion, funded by the German Federal Ministry of Education and Research (BMBF), therefore looks at ways of making demand planning more transparent, thus enhancing understanding of the required measures. “The aim is also to improve the scenarios for grid expansion planning,” says Christof Timpe. „So we are holding scenario development workshops with stakeholders such as citizens’ action groups and environmental organisations, focusing on the electricity sector and the scenarios’ potential impacts on grid expansion.”

So far, the project’s findings suggest that the scenarios on which the Grid Development Plan is currently based should be enhanced with additional options, with substantially reduced deployment of coal-fired power plants and regionally optimised distribution of renewable energies. “It is quite conceivable that redefining the scenarios for grid development will present a different picture of the need for specific transmission projects,” says Timpe. “However, the basic requirement for grid expansion – for example, along the north-south axis – is not called into question.”

On the issue of power grid expansion, there is still considerable disagreement on the right approach. For the Oeko-Institut’s experts, however, it is the buildings sector that gives real cause for concern in the context of the energy turnaround. According to Christof Timpe’s colleague Veit Bürger, this is a “major black spot”, with problems including outdated heating systems and poorly insulated buildings. “For decades, we have heard lip service being paid to the substantial need for action here, but no policy decisions are being taken,” says the Deputy Head of the Energy and Climate Division. He finds it especially vexing that tax relief for energy upgrading of buildings has failed to come about, “although this would have been no more than a tiny element of the energy transformation mosaic”. He admits that this is not a straightforward sector, partly because it is far more fragmented than, say, the electricity industry. “You’re dealing with millions of householders, so of course it is more difficult to make rapid progress.” Nonetheless, effective action is possible, such as the introduction of a climate levy, payable by householders depending on the energy status of their property, and the long-term obligation to carry out upgrading. “We also need better enforcement of the existing rules. And that means more municipal staff, for example, to ensure that building standards are genuinely being complied with.

More energy efficiency in the buildings sector was also the theme of the Entranze project, which ended in autumn 2014 and aimed to support policy-makers in developing measures to increase efficiency. The Oeko-Institut was a member of the research consortium which implemented the project. “For Entranze, we analysed the European building stock and owner behaviour and investigated technology acceptance and least-cost upgrading technologies,” explains Veit Bürger. On this basis, the researchers then estimated the effectiveness of policy tools to 2030 and developed policy recommendations for the EU building sector. “We found that with ambitious targets and innovative support mechanisms, there is potential to cut the EU’s greenhouse gas emissions by as much as 50 per cent by 2030.” Key measures include refurbishing buildings to a high energy standard, gradually phasing out coal- and oil-fired heating, and using more low-energy lighting. In the experts’ view, this will require consistent and appropriate updating of Germany’s Energy Saving Ordinance, for example. “Owners also need better information about energy upgrading and support schemes. And we need stringent quality standards so that energy upgrading genuinely produces the savings that we can expect to achieve if these measures are implemented correctly.”

A beacon in a complex world

So what is Christof Timpe’s view of the public debate about the energy turnaround? His message is clear: “In the last 10 years, the issues have become far more complex and therefore more difficult to address, largely because classic black and white thinking is simply no longer possible in many cases.” The continued expansion of renewable energies is a case in point: as they now account for a significant proportion of the power supply, the system as a whole must be adapted to facilitate further renewables growth. “And that’s a far more complex task than simply building as many new wind or solar plants as possible.”

Although 35 years have passed since the first study on energy system transformation, Christof Timpe believes that the Oeko-Institut still has a crucial role to play. “We have become a kind of beacon. What we are trying to do with our analyses, in this complex situation, is to chart the right way forward. And that is sometimes a painful process; the future of the European and German coal-fired power plants is such a case.” Will the energy turnaround be brought to a successful conclusion within the next 35 years? Christof Timpe isn’t sure. But he does know that it is possible. “It is entirely feasible to cut our greenhouse gas emissions by 95 per cent before 2050. But that will require consistent and courageous policy decisions.” Christiane Weihe

Germany has set itself clear targets for the coming years and decades: a 40 per cent reduction in greenhouse gas emissions by… more

I am proud to say that I myself had a hand in pioneering energy system transformation at the Oeko-Institut in the early days.… more