A world full of plastics

Consuming less plastics – how does that work? 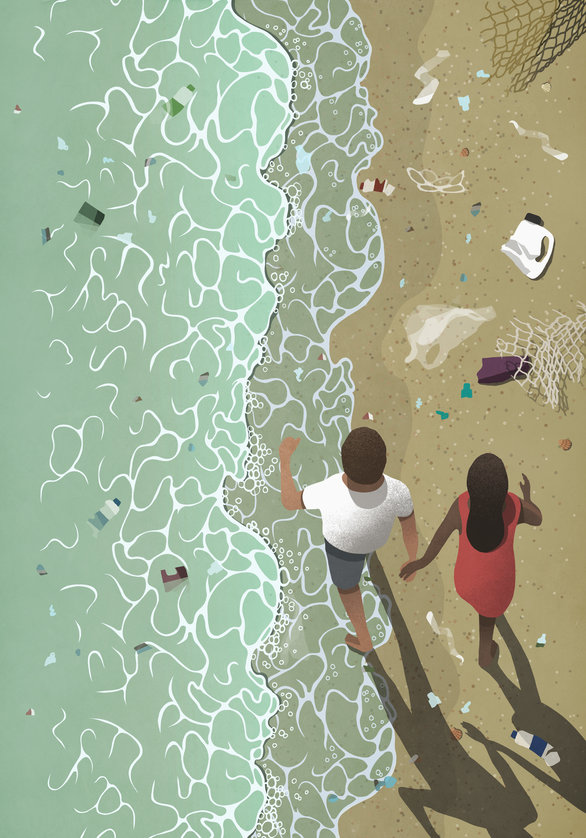 Worldwide, more than 400 million tonnes of plastics are produced each year. Plastics are ubiquitous in our everyday lives – in the packaging of food and cosmetic products, in mixing bowls and cleaning buckets, in cars and bicycles, in clothing and furniture. This omnipresent material – “plastics” is actually an umbrella term for a variety of manmade polymers – is a relatively new arrival on the scene. Not until the second half of the 20th century did it become widely used in everyday life. Since then, though, consumption has increased rapidly. There are good reasons for this: plastics are efficient, practical and cheap. But the way in which we use them has a host of negative impacts, particularly on the environment. How these can be mitigated is an issue being explored by the Oeko-Institut in a number of projects.

“Plastics have many advantages,” says Dr Andreas Köhler of the Oeko-Institut. “They have favourable technical properties, are light and can be easily moulded and dyed. They are also safe to use, since they don’t splinter like glass. And by comparison with other materials, plastics definitely score in terms of ecoefficiency.” Dr Köhler, a senior researcher in the Sustainable Products & Material Flows Division, also highlights the time-saving benefits of plastic packaging. “It means, for example, that we can buy ready-to-eat food at the supermarket when we are in a hurry. Our lifestyle has become totally geared to eating our fill without having to put in a lot of time, instead of buying fresh foods from the farm.” Food packed in plastics is generally regarded as more hygienic and less perishable. Nevertheless, plastics encourage a quick and careless attitude to food, says Köhler. “In Germany, the amount of food that ends up in waste averages 82 kilos per person per year, despite protective packaging. As a result of careless consumption, what are really the excellent advantages of plastics quickly turn into disadvantages.”

Careless disposal of plastics results in pollution on a vast scale. “Around 75 percent of the rubbish found in oceans and on beaches contains plastics – including plastic bags and bottles, single-use products and fishing nets,” says Köhler. It is estimated that between 4.8 and 12.7 million tonnes of plastics waste get into the world’s oceans each year and are never removed. Vast gyres of plastic particles drift in the oceans – garbage that has a very serious effect on marine fauna. “Birds, turtles and fish swallow our plastics waste, become entangled in it or are strangled by it,” explains Köhler. “In addition, all sorts of harmful substances such as softening agents and fire retardants get into the oceans with the plastics.” And we mustn’t forget that plastics are a material produced almost entirely from fossil resources.

The Oeko-Institut, working with ZEUS GmbH, has explored the problem of littering – the deliberate or negligent leaving of waste in public places – in the project “Status quo, action potentials. Instruments and measures to reduce littering”. On behalf of the German Environment Agency (UBA) the project team conducted an online survey of organisations such as public-sector waste management agencies and nature conservation associations. This yielded interesting facts on the types and quantities of litter and on the disposal costs, as well as providing ideas for limiting this waste. “What measures are effective? This was one of the key questions that the project was asking,” explains Dr Georg Mehlhart of the Oeko-Institut. The Deputy Head of the Resources & Transport Division emphasises that many different instruments are needed at federal, state and municipal level. “Starting points can include things such as expansion of returnable packaging systems, bans on single-use products for which alternatives are readily available, getting takeaway providers to contribute to the costs that arise from the littering of their products, or deposits on a wider range of products,” he says. “Better waste logistics and improved product design can also help reduce litter.” Respondents rated accompanying education and awareness-raising measures as particularly effective. In addition, almost 80 percent of respondents believe there is a need for further measures – such as bigger fines and stricter monitoring. “Our analysis also recommended that those responsible for dealing with litter should network with each other and exchange information and ideas on successful approaches,” says Mehlhart.

It is not only carelessly discarded plastic objects that pose a major problem for our ecosystems but also plastic microparticles, known as microplastics. These are less than five millimetres in diameter and come from articles such as cosmetic products. “Microplastics also arise from the slow decay of plastic products and from abrasion of products such as car tyres,” says senior researcher Dr Andreas Köhler. Microplastics are now being found in soils, rivers and oceans, causing irreversible pollution. Marine animals such as shellfish and fish ingest these plastic microparticles and hence also the harmful substances that they contain. “At present we cannot even estimate how harmful microplastics are; as a precaution we must therefore reduce their release into the environment,” says Köhler.

In the now-concluded donation-funded project “Living without plastics – but how?” the Oeko-Institut studied three product groups that release large quantities of plastic particles into the environment – vehicle tyres, man-made textiles and plastic food packaging – and considered how these quantities could be reduced. “Hardly anyone knows that tyre abrasion is the largest source of microplastics in the environment,” explains Köhler. “In Germany, road traffic produces around 100,000 tonnes of plastic particles per year. That is about a third of the overall total.” According to the project team, the only way in which drivers can reduce tyre abrasion is by using their cars less and by driving gently. Tighter legal rules on tyre characteristics and expansion of the EU tyre label could help tyre manufacturers and the automotive sector sell tyres that shed fewer microparticles.

Something of which the majority of consumers are unaware is that synthetic clothing is also a source of microplastics: when these garments are worn and washed, they shed polymer microfibres – about 77 grams per person per year in Germany. Discarded synthetic-fibre textiles can also become a source of microplastics – for example, if the second-hand goods are sent overseas and, once they have been used, end up on unsorted rubbish dumps there. “Do we really need new clothes all the time? Must we always have the latest fashion?” asks Andreas Köhler. “Furthermore, in our everyday lives we don’t always need the functions of synthetic fibres – except perhaps for rainwear. But we must be careful: simply replacing man-made fibres with natural ones is not necessarily good for the environment, because vast quantities of water and pesticides are used in cotton production.” Köhler believes that we should value our clothes more and repair them instead of throwing them away at the first sign of wear. “Here, too, policy-makers can intervene through regulation; for example, they could reduce value-added tax on the repair and modification of used clothing.” As another starting point, washing machine manufacturers could develop permanently installed microfibre filters for their appliances.

Food consumption is another major source of plastics waste. Between 80 and 90 percent of the food in our homes arrives in pre-processed form – ready-meals, packaged meat and cheese, yoghurt in disposable pots. This is convenient, but it doesn’t have to be like this. “For example, supermarkets have already started to replace plastic carrier bags with reusable fabric bags. And the zero packaging shops that are springing up are showing that shopping doesn’t need to involve lots of plastics,” the senior researcher says. “We should also think about portion sizes when we go shopping. Taking one whole salami home with you is better than buying several 100-gram portions.” He points out that it is also important to avoid food waste, because packaging is often thrown away with the unused food. “Retailers could also introduce a return and reuse system for food containers”. This is clearly an issue for policy-makers. For example, the EU-wide ban on single-use plastic products such as plastic plates, cutlery and straws, which comes into force in 2021, could be extended (for more on the EU ban see the interview with Piotr Barczak on page 14). In the researchers’ view, the prohibition could usefully also cover disposable plastic bottles for fruit juices and soft drinks, since these are particularly hard to recycle.

The Oeko-Institut researchers regard living entirely without plastics as unrealistic as long as mass consumption remains a hallmark of our society. Simply replacing plastics with other materials is not necessarily advantageous in environmental terms either. But the serious impacts of plastics consumption on our ecosystems are incalculable; they require us to at least significantly reduce our consumption of this material and hence to change our consumption habits. “We are all part of the problem, but we can all change something every day,” says Dr Andreas Köhler. “However,” he continues, “living completely without plastics is not something we can impose on individuals. We need the right policy framework and a more radical transformation of society and the economy.” The aim is a world perhaps not entirely without plastics, but in which this marvellous yet menacing material is used sensibly and sustainably.

After studying ecology and environmental management at university, Dr Andreas Köhler went on to take a Master’s degree in environmental management and policy. He wrote his doctoral thesis on the environmental risks of new technologies at Delft University of Technology. As a senior researcher at the Oeko-Institut he now works on various sustainability aspects of chemicals and technologies, focusing in particular on electrical and electronic products and digitalisation.

Press release from the German Environment Agency (UBA): Plastics in the environment

A large proportion of plastics waste in Europe is not recycled but instead incinerated for energy generation. Thirty-nine…

“The European Commission’s Action Plan is pursuing a promising strategy”