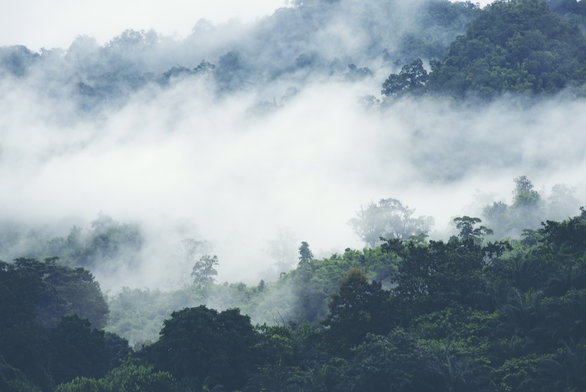 The survival of the world’s forests is at risk. In Brazil, 7,900 square kilometres of rainforest were cleared over the past year, mainly to make way for agriculture. In Indonesia, forests are vanishing, often replaced by palm oil plantations: between 1990 and 2015, the country lost roughly a quarter of its forest area. Nigeria lost roughly 60% of its forest cover in the same period. The numerous forests in South America, Asia and Central Africa are of vital significance for human communities, biodiversity, the environment and the climate worldwide due to their species richness, their function as carbon sinks and water reservoirs, and their role in soil conservation. So what can be done to halt the destruction of the world’s forests? The Oeko-Institut explores this issue from various perspectives.

Forests around the world perform many important functions, as Dr Klaus Hennenberg, a Senior Researcher in the Oeko-Institut’s Energy and Climate Division, explains. “They provide raw materials, not only wood. Local indigenous communities use them as a source of plants and animals for food, as well as medicines.” The biodiversity of the tropical rainforests is legendary: they are home to 50% of the Earth’s flora and fauna. The South American rainforests provide a habitat for 90,000 different plant species, and as many as 70 species of ant can be found on a single tree. But this diversity has already declined dramatically as a result of logging and continues to face major threats.

The world’s forests also perform vital ecosystem functions. They serve as natural water reservoirs, for example: “Precipitation is intercepted by forest canopies and this improves the absorption of water by the soil. If there are no trees, there is a much greater risk of flooding,” Dr Hennenberg explains. “Excessive logging in the rainforest disrupts the important hydrological cycle, and this can have a very serious impact on the local climate, for example.” Forests are also important for soils. “Roots and foliage protect the soil. Without them, there is a risk of erosion.”

As Dr Hennenberg emphasises, the world’s forests are particularly important for regulation of the climate. “They are major carbon sinks, so if a forest is cleared or burned, CO2 is released back into the atmosphere. It takes 80 to 100 years for a newly planted tree to store the equivalent amount of carbon. The destruction of forests on peatland produces particularly high emissions because carbon dioxide is then released from the soil as well. Climate change in turn has an impact on forest growth, and in many cases, this is likely to be negative. Deforestation often disrupts hydrological cycles, resulting in less rainfall in the region, and this can cause dieback of the remaining rainforest.”

What can be done to halt this ongoing deforestation? The Oeko-Institut explored this question as part of a project titled “Study on EU financing of REDD+ related activities, and results-based payments pre and post 2020”. “REDD+ is a UN programme which provides financial incentives to support the conservation and enhancement of forest stocks,” says Dr Hannes Böttcher from the Oeko-Institut’s Energy and Climate Division. “Under the programme, less well-resourced countries receive institutional and private flows of funding for protecting their forests and reducing deforestation.” On behalf of the European Commission, the project team from the Oeko-Institut, the Center for International Forestry Research (CIFOR) and consulting group COWI compared 41 countries receiving this financial support and identified those with the highest capacity to implement forest conservation measures under REDD+. “It is important to bear in mind that countries have very different starting points and that the data was highly complex and not always reliable,” says Dr Böttcher. “The study showed that Malaysia, Ghana, Brazil, Indonesia and Ecuador have particularly high potential for forest conservation, and yet the countries with the highest potential are not necessarily receiving most of the funds.” A total of USD 19 billion went to REDD+ between 2008 and 20I5. However, as Dr Böttcher points out, countries’ reliance on financial support varies considerably. Financial flows should therefore be prioritised, taking into account not only the REDD+ potential but also the extent to which action to avoid deforestation can be initiated and monitored in the country concerned.

What action can be taken at the local level to avoid deforestation? This question is currently being explored by experts from the Oeko-Institut’s Sustainable Products and Material Flows Division. They visited Indonesia to conduct field research on the social and environmental flashpoints of palm oil cultivation, which is strongly linked to deforestation. “The main focus of our visit was to find out about the impacts of certification schemes and due diligence on the local situation and to identify the limitations of these schemes and where there is a need for improvement,” says Tobias Schleicher. The team conducted a large number of interviews with stakeholders. “We visited Java, Sumatra and Borneo and spoke to the public authorities, research institutes, businesses, industry associations and smallholder cooperatives,” says his colleague Inga Hilbert. There is already one clear conclusion to be drawn: certification schemes alone will not protect the forests.

The EU’s recast Renewable Energy Directive (RED II) will roll back, not increase, global forest conservation, according to the Oeko-Institut. “RED II aims to increase the share of renewables in total energy consumption – but the way in which this is being done is a massive step backward for sustainability,” says Dr Klaus Hennenberg. For example, RED II sets a target of a 1.3% increase in the share of renewable energy supplied for heating as a yearly average. “It is highly probable that much of this will come from wood, as this is the simplest option,” he says. “RED II creates a massive incentive for more fuelwood use in the EU.” This increased demand will probably be met from imports.

“Unfortunately, sustainability requirements are very poorly regulated,” Dr Hennenberg continues. He is also critical of the reduced level of protection now afforded to high-value forests. “In the forestry sector – unlike the situation in agriculture – primary forests can now be used as a source of bioenergy in Europe; the same applies to forests on peatland, which are particularly problematical,” he explains. As part of the Nature Protection and Advanced Biofuels project, commissioned by the German Federal Agency for Nature Conservation (BfN), the Oeko-Institut provided scientific background on the negotiations on RED II, including advice to the German Environment Ministry. In addition, the results of analyses and ambitious sustainability requirements at EU level were discussed with members of the European Commission, industry representatives and NGOs – but to no avail. “The Directive, with its weak sustainability requirements for forests, will remain in force until 2030, and unfortunately no other opportunities to move towards more sustainability will arise until 2025, when the review process begins,” says Klaus Hennenberg. Until then, the Directive will simply worsen the threat to the world’s forests.

Dr Klaus Hennenberg is a Senior Researcher in the Energy and Climate Division. His areas of expertise include sustainability criteria for biomass production, specifically in relation to biodiversity, soil and water resources, as well as modelling and statistical analysis techniques.

Article on the Oeko-Institut blog: Erosion of European sustainability requirements for bioenergy

News: Struggling to follow the flow of REDD+ finance

The forest is a magical place. It is home to trees that are many centuries old, as well as to countless species of fauna:… more

When Hermann Graf von Hatzfeldt took over the Hatzfeldt-Wildenburg family forests in 1969, a clear-cutting system was in… more