A question of ethics 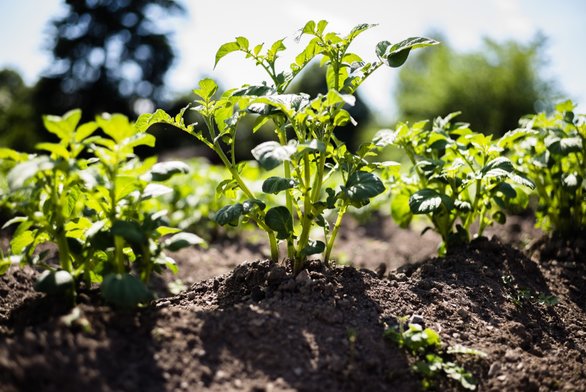 Type “pictures of biomass” into Google, and what pops up on your screen? Photos of rape fields, wood pellets and biomass plants – the full bioenergy spectrum. Images linking biomass to food production, on the other hand, are hard to find. On the Internet, biomass seems to be synonymous with bioenergy: food plays a minor role in this context. And yet the food/fuel nexus deserves to be centre stage in the debate about sustainable biomass use. The precedence of food security over energy should be a given. But the competition is intensifying.

The United Nations Food and Agriculture Organization (FAO) estimates that around 800 million people worldwide are chronically hungry. In view of the predicted developments in the world food markets, this is unlikely to change any time soon: the FAO projects that global agricultural production in 2050 will have to be 60 per cent higher than in 2005/07 in order to meet demand from a growing world population. The demand for regenerative raw materials is also growing, not least as a result of changing dietary habits. “Meat consumption is increasing, and this has a direct impact on food and animal feed production,” says Katja Hünecke, Deputy Head of the Oeko-Institut’s Energy and Climate Division in Darmstadt. “The reason is that far more resources are needed to produce a kilo of meat than a kilo of grain.” Agriculture – mainly food and animal feed production – occupies around 37 per cent of the world’s landmass, but the failure to comply with the principle of sustainability is, quite literally, costing the earth: the world loses roughly 24 billion tonnes of fertile soil every year (see Diverse but finite – Sustainable production of biomass, p. 4). According to the 2015 Soil Atlas, 17 per cent of the agricultural land in the European Union is degraded – with soils significantly damaged or even completely destroyed.

Alongside these challenges, there is the issue of rising bioenergy production, which competes with various other forms of biomass use, particularly food production. In 2011, the FAO and OECD predicted that by 2020, around 15 per cent of global coarse grain and oilseed production and 30 per cent of sugar cane production will be driven by strong demand for biofuels. “In recent years, bioenergy has become ever more important; for example, the amount of biofuel manufactured from agricultural products more than tripled globally from 2000 to 2012, and we are expecting this trend to continue,” says Katja Hünecke. The growing significance of biofuels also affects prices on the food markets. “Of course, biofuel production is just one factor, but it certainly has an effect,” she says. “Even if we assume a very small correlation – let’s say 1 per cent – between bioenergy use and hunger, this means that around eight million people are affected.”

How much bioenergy would wealthy countries have to give up in order to bridge the food gap? This issue was explored by Oeko-Institut experts in a recent analysis for the German Federal Ministry for Economic Affairs and Energy. “Here, we developed an indicator which measures the relationship between the potential food deficit in countries affected by hunger and bioenergy demand in affluent countries,” says Katja Hünecke. This was calculated on the basis of population figures, the percentage of hungry people according to the Global Hunger Index (GHI) produced by the International Food Policy Research Institute (IFPRI 2013), and the assumption that in countries affected by hunger, each hungry person suffers from a 500 calorie deficit, meaning that their daily diet falls short of what is needed for good nutrition. As the next step, the experts calculated the reduction in bioenergy availability in affluent countries that is required to make up this nutritional gap, based on the hypothesis that 10 per cent would be met from animal sources and 90 per cent from crops. “We then converted the calories into petajoules and deducted this figure from the amount of bioenergy available in affluent countries,” says Katja Hünecke. These calculations were then tested in various scenarios and underpinned with sensitivity analyses. “We found that the nutrition gap responds very sensitively to the postulated GHI limit value, the reason being that with a low GHI, more hungry people are included in the calculation than with a high GHI. This reveals a much higher food deficit.”

The findings of the analysis show that the calories needed to meet minimum nutritional requirements in countries affected by hunger are a fraction of current bioenergy demand in countries with high GDP. “Our calculations show that simply based on the arithmetic, without taking account of issues such as food access and distribution, wealthy countries could bridge this hunger gap by cutting their bioenergy demand by around 7 per cent,” says Katja Hünecke. In the researchers’ view, the amount of land being used to grow energy crops in these countries should be reduced rather than increased. But there is another way of freeing up farmland, as Katja points out, and that is to produce and consume less meat and other animal products. “The German Foundation on Future Farming has calculated that 5 per cent of farmland could be freed up if every German went without meat and dairy for one day a week. And this figure could rise to 15 per cent if we complied with German Nutrition Society recommendations.”

Another important step towards sustainable biomass use is to substantially boost efficiency. There are many options here. As a starting point, there is potential to extract the maximum from harvests and increase yields in many regions of the world. This can be achieved through better crop rotation and improved management, avoiding harvest losses due to poor storage and transport, for example. As Katja points out, “only around 50 per cent of the food produced around the world actually reaches the consumer.” But it also includes policies and strategies that adopt an integrated approach to the bioenergy/food nexus, rather than viewing the two sectors in isolation. “There is also a need for many more initiatives that couple different forms of biomass, so that efficient use can be made of by-products, for example. This is closely linked with the cascade principle, in which material use comes before energy.” There are many definitions of what constitutes a good cascade. “In simple terms, it means that when using timber, for example, its first use should be as a building material. After that, it can be used to make furniture, with energy coming last of all.”

Improving efficiency is an important starting point for future biomass use. But Katja Hünecke wants more: she is calling for a more ethical approach. In her view, what industrialised countries do with their farmland is ultimately an ethical issue. “There needs to be more equitable distribution of prosperity,” she says. And that may well include giving up some of the financial gains from bioenergy production. “Ultimately, it’s about how we deal with other people in the world community, and that may mean that we have to make sacrifices and accept that we may not be able to achieve all our goals. But if we take a hard look at hunger in the world today, that should be something that the industrialised countries are willing to accept.” Christiane Weihe

Thematic web page: On the plate or in the tank? Sustainable biomass means more than that!

Website: On the plate or in the tank? Sustainable biomass means more than that!

Further information from the Oeko-Institut will soon be available here.

Report: Food Security and Sustainable Productivity Growth by the Scientific Advisory Board on Agricultural Policy at the Federal Ministry of Food, Agriculture and Consumer Protection (BMEL)

Biomass is in abundant supply. It comes in the form of foodstuffs, such as cereals, fruit and sugar. And we are familiar with… more

“Energy supply units will be smaller in size”

How can regenerative resources make the best possible contribution to our energy supply? This is the key issue on the… more

“Energy supply units will be smaller in size”