Issue: April 2022, A quiet climate champion – The future of e-mobility

E-mobility in the commercial sector 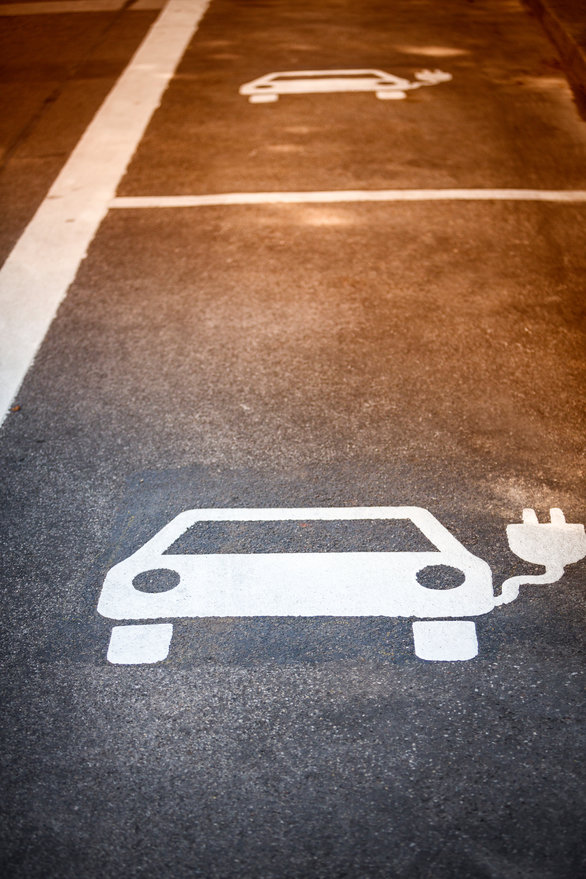 They are already a familiar sight on the roads: bikes, mopeds, cars and buses that are powered by batteries instead of petrol. And their numbers are increasing: according to Germany’s Federal Motor Transport Authority, fully electric passenger cars accounted for a 13.6% share of new registrations in 2021, compared with just 6.7% the previous year. In August 2021, the number of e-vehicles on German roads reached the one million mark for the first time, with fully electric vehicles accounting for 54% of that figure. A success story – but still a long way off the target set by the new German government in its coalition agreement, namely to have at least 15 million fully electric passenger cars in Germany by 2030. Achieving this goal will require not only the positive development of a dynamic market but also appropriate frameworks and effective mechanisms. There is significant leverage in the commercial sector, which accounts for more than 60% of new registrations. So how can the share of e-vehicles be increased here? Various Oeko-Institut projects aim to answer that question.

There are many reasons why it is worth taking a closer look at the commercial sector. In Germany, commuting or business travel accounts for 38% of passenger-kilometres. “But in many cases, company cars are only kept for a short time and are then placed on the used car market – yet they could be giving a boost to e-mobility as the company sector is where more than 80% of private vehicle purchases are made,” says Moritz Mottschall, a senior researcher at the Oeko-Institut. “What’s more, company cars are a good way to convince large numbers of people of the benefits of e-mobility.”

E-vehicles offer a great many benefits for companies – and yet on average, they make up just 3.3% of commercial fleets in Germany. Why so low? “Unfortunately, there are not enough incentives to make fleet operations more eco-friendly – quite the contrary,” says Moritz Mottschall. “Indeed, under the current tax regulations, emissions-intensive vehicles are a financially attractive option, and there are very few fiscal incentives to limit the private use of company cars or improve their fuel efficiency.” As he explains, this is partly due to the rules on deductibility of vehicle costs and the relatively low income tax assessment of the utility value if a company car is used for private purposes. “In fact, in many cases, there is no record of how often the car is used privately or for business.” To boost the sustainability of fleet operations, it should not be more advantageous to use a company vehicle than a private passenger car. “What’s more, it is mainly the more affluent who enjoy the benefits of company cars.”

In the “Compan-e: Pathways towards Electric and Sustainable Corporate Mobility” project, the Oeko-Institut has been working with various project partners, including Agora Verkehrswende, Deutsche Bahn and R+V Versicherung, since 2019 to determine how the share of e-vehicles in the business sector can be increased. “It’s a very exciting project because many practical partners are involved. We are supporting them as they switch their company fleets to e-mobility, and we are engaged in a lively dialogue. We are on quite a steep learning curve when it comes to the basic elements of their car policies – in other words, the rules governing the procurement of company vehicles and the obstacles that stand in the way of electric vehicle purchases.” For example, there are often long delivery times, or manufacturers’ ranges do not include models that are particularly relevant to companies, such as compact vehicles for the car pool, light commercial vehicles for the service team and estate cars for company car users. Instead, there is a predominance of SUVs, including in the e-vehicle ranges. “Often, users and managers do not have sufficient knowledge of the real potential of an electric fleet or the investment involved in establishing a charging infrastructure. So there are a great many information gaps which need to be addressed, and that is one of the goals of company-e.”

There is certainly scope for a political steer to ensure that more needs-appropriate and efficient vehicles are made available. For example, the project team is calling for a bonus/penalty system which would ensure that the procurement costs of high-emission passenger cars exceed the costs of highly efficient vehicles with low carbon emissions. There is also considerable leverage in the taxation of company cars, which should be aligned more strongly with environmental criteria. In Germany, these taxes are still too low, including for emission-intensive vehicles. “Other countries have a graduated system for assessing the deductibility of vehicle costs or utility value, based on carbon emissions,” Moritz Mottschall explains.

So for the time being, in the senior researcher’s view, there will continue to be a need for active promotion of electric cars – which means fully electric vehicles. At present, many companies rely on plug-in hybrids, which combine an electric with a conventional drive. “Their climate benefits are massively exaggerated as they tend to be driven mainly in conventional mode on a day-to-day basis, with a very low share of electric driving. They should only benefit from tax relief if there is evidence that they have covered a specific proportion of mileage in electric mode. Apart from e-mobility, however, more could be done to improve sustainability in corporate mobility; one example is to boost the appeal of mobility budgets as an alternative to company cars.”

Of course, electromobility in the commercial sector does not just mean vehicle fleets and passenger cars. Road freight transport is another relevant aspect. Here, research is currently under way on heavy-duty vehicles that are powered by overhead lines, but battery electric trucks also play an important role. So how much potential do alternative drive systems offer here? This topic is currently being studied by the Oeko-Institut in the “Strategy for the Electrification of Road Freight Transport (StratES)” project in cooperation with Heilbronn University of Applied Sci­ences. “The project is very practically oriented and is intended to show how alternative drive systems can be used and which conditions need to be in place for that to happen,” says Moritz Mottschall.

With funding from the German Environment Ministry, the project team has already looked at the status quo and the potential for overhead lines, battery systems, alternative fuels and hydrogen fuel cells. “Among other things, we found that battery electric heavy-duty vehicles currently appear to be most advanced in their development; over the next few years, we are expecting a market ramp-up with production models in local and regional transport. What’s more, the direct use of electricity is far more efficient than using electricity-based hydrogen in fuel cells.” In a previous project, the researchers identified the climate benefits of e-trucks: regardless of whether the e-trucks are powered by batteries or overhead lines, their overall efficiency is 73% – far better than the figure for fuel cells or e-diesel trucks – i.e. the use of electricity-based synthetic fuels – with 31% and 21%, respectively. “It is now important to capitalise on these benefits while also giving haulage companies the stability they need for long-term planning. And in our view, that should not focus primarily on hydrogen, which is needed more urgently in other sectors, such as the steel industry, or as a raw material for synthetic fuels for aviation.”

From resource to recycling

E-mobility is no stranger to criticism – whether it is about ranges, charging infrastructure or CO2 emissions from vehicle…

more
From resource to recycling

“Most people who are opposed to e-vehicles have probably never even sat in one.”

The batteries run down too fast and can’t be recycled and the emissions are far too high. These are just some of the…

more
“Most people who are opposed to e-vehicles have probably never even sat in one.”