Issue: September 2022, A perfect circle – How does the circular economy work? 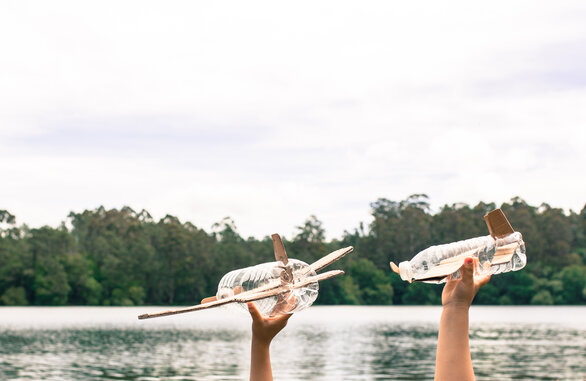 Very often, the circular economy only extends as far as the nearest rubbish bin. For many people, the circular economy simply means waste management – the plastic bottle that is later converted into a park bench. But there is much more to it than that. The aim is not just to create closed loops for raw materials but to slow down substance cycles altogether – not only in waste management, but also in buildings, transport and the garment industry. A circular economy recognises concepts such as waste prevention, reuse and repair. It starts with product design and encompasses manufacturing and (re)use. Reducing consumption is a key building block in the move towards a circular economy.

“When we talk about a circular economy, what we are talking about is nothing less than a new economic model – a structural transformation in line with environmental principles and a paradigm shift at the same time,” says Siddharth Prakash, Senior Researcher and Head of Subdivision at the Oeko-Institut. “The circular economy is a key field of action in this sustainable transformation as it is relevant not only to greenhouse gas emissions but also to biodiversity loss, resource consumption and pollution.”

The German government’s coalition agreement includes a commitment to reducing resource consumption and creating closed loops in the economy. A relative decoupling of economic growth from resource consumption is not enough, however: due to the multiple impacts of our consumption habits and lifestyles on the environment and climate, resource use must be reduced in absolute terms. “What is needed, for example, are measures that significantly lengthen product lifespans and usage times, such as minimum durability requirements,” says Siddharth Prakash. And, not least, sufficiency: this means cutting our resource and energy consumption. “Waste prevention and reuse are right at the top of the waste hierarchy, with recycling following behind. Without sufficiency, we cannot achieve the goals of the circular economy. We need to talk about the size of our apartments, the number of cars on the road or textile usage times.” And as Siddharth Prakash points out, while many politicians shy away from discussing sufficiency, Russia’s war of aggression against Ukraine makes it clear that sufficiency is essential for economic sovereignty and the independence of our resource supply.

A circular economy in Europe

The European Commission adopted the Circular Economy Action Plan in 2020 as part of the European Green Deal. Then in March 2022, it unveiled various measures and initiatives to clear the way for a circular product policy. Aims include promoting product longevity, the right to repair, and recyclability. A new Ecodesign for Sustainable Products Regulation (ESPR) will replace the current Ecodesign Directive. Other products such as textiles and furniture are to be included and more ambitious criteria applied to almost every type of product.

The Sustainable Products Initiative (SPI) is a core element of the circular economy measures adopted at European level. Together with project partners, the Oeko-Institut is advising the European Commission on its implementation. “For example, we are analysing data and information about the destruction of unsold consumer goods in the EU,” says project leader Kathrin Graulich from the Oeko-Institut. “We can thus gain feedback on the environmental impacts of these practices and assess the economic drivers and outcomes for the businesses concerned.” The Oeko-Institut is also analysing the norms and standards that are directly relevant to successful implementation of the digital product passport. “This will be a central element of European product policy. It will include detailed information about products and thus enhance consumer choice while making it easier to repair and recycle,” says Kathrin Graulich.

In the donation-funded project “An appeal and proposals for a circular economy”, the Oeko-Institut will be focusing intensively on closed loops. “Among other things, we will be analysing the factors that hinder the progress of a circular economy and developing policy solutions,” says Siddharth Prakash. The researchers will examine innovative utilisation concepts which exist away from the spotlight, and will look at ways to increase the proportion of reusable packaging. “The reasons for short product lifespans and usage periods lie in the prevailing cost structures,” says Siddharth Prakash. High costs of wages and replacement parts in Germany mean that repair costs seem excessively high compared with the price of a new purchase, and this deters consumers. “Granted, long-lasting devices are more expensive to buy, but they are generally easier to repair,” he emphasises.

In order to solve the problem of shrinking lifespans and usage periods for electrical and electronic devices, a different cost structure is required, in the Oeko-Institut’s view – one in which manufacturers contribute to covering the environmental and social costs of production and disposal. “Extended producer responsibility should go beyond the financing of collection and recycling and focus on promoting waste prevention, reuse and repair,” says Siddharth Prakash. Product policy measures are also required, such as ambitious minimum service life requirements and an expansion of consumer protection, including longer guarantee periods. “In the donation-funded project, we will develop a strategy showing how technical, economic and legal measures can meaningfully complement each other in the interests of a genuine circular economy. The environmental value-added is clear: if smartphones lasted seven years and TVs 13 years, this would result in an annual saving of almost three million tonnes of CO2 equivalents in Germany.”

The circular economy in the international context

Implementing the circular economy is no easy task, for there are many conflicts of interest. “The circular economy is often lauded as a win-win situation for everyone. But when products become more expensive because resource costs increase, the impacts are felt mainly by people on low incomes. So it is important to be mindful of the social dimension and strike a balance here.” The topic gains in complexity because it requires an international perspective. “We are part of global value chains and have to tailor our action accordingly, because it will have consequences for the environment and people in other countries and their jobs and wellbeing,” says Siddharth Prakash.

The Oeko-Institut is involved in several projects that focus on the circular economy in other countries. In Mexico, for example, it is working with the Instituto Nacional de Ecología y Cambio Climático (National Institute of Ecology and Climate Change – INECC). “Taking the examples of textiles and smartphones, we have shown that circular economy measures in Mexico have the potential to save around six million tonnes of CO2 equivalents annually. This corresponds to the combined annual per capita greenhouse gas emissions of 1.6 million Mexicans.” On this basis, the Oeko-Institut has identified areas where action is required in Mexican product policy. In addition, with financial support from the Deutsche Gesellschaft für Internationale Zusammenarbeit (GIZ) GmbH, the Oeko-Institut is assisting countries in South-East Asia to develop strategies, action plans and mechanisms to promote a circular economy. “In Malaysia, the circular economy was then included as a central pillar in the country’s 12th five-year plan,” Siddharth Prakash explains. And in Thailand, researchers are supporting the government’s efforts to develop a national strategy on the bio-circular-green economy. “But individual efforts at the national level will not be effective. We need a global agreement so that material flows and environmental impacts are not simply shifted to other countries.”

A model for the circular economy in Germany

How will the establishment of a circular economy affect the conservation of the environment, resources and biodiversity – and the German economy as a whole? On behalf of WWF Germany, researchers from the Oeko-Institut are currently exploring this question in a feasibility study, entitled “Model Circular Economy Germany”, in collaboration with Fraunhofer ISI and Freie Universität Berlin. “We are laying the scientific bases for a comprehensive and effective strategy to make a sustainable circular economy a reality,” Senior Researcher Siddharth Prakash explains. “To that end, we are identifying relevant material flows, products and sectors, among other things, and defining potential circular economy measures in each sector. We are also looking at possible interactions, conflicts of interest and structural conditions in the market that affect the implementation of individual measures.” The goal is to clarify basic technical and methodological issues of relevance to the modelling of the environmental and economic impacts of circular economy measures. “We are talking about 100 to 150 measures in 11 sectors, including textiles, the automotive industry, construction and food production. In the next phase, the measures will be clustered and analysed in terms of their impacts on greenhouse gas emissions, resource consumption, biodiversity, employment and value-added,” says Siddharth Prakash. “On this basis, we are supporting WWF’s efforts to develop a policy roadmap for the circular economy in Germany. WWF’s goal here is to identify an integrated pathway towards the circular economy on a sound scientific basis. The organisation is keen to progress mandatory and ambitious implementation of the national circular economy strategy announced by the German government in its coalition agreement.”

Far-reaching but still far off

A radical transformation is required – but time is running out. “Ecological tipping points are being reached more quickly than many people were willing to acknowledge – the melting of the ice sheets is a case in point,” says Siddharth Prakash. This radical transformation therefore requires an ambitious and integrated approach by all stakeholders – the business community, policy-makers and civil society. “Unfortunately, we are nowhere near the right path yet. Most circular economy models are still not economically viable, and policy-makers are not doing enough. For example, we are clearly lagging behind other European countries in our use of reusable materials.” So what would the Senior Researcher suggest? “Let’s get on with it! Right now. In every sector. No delays, no excuses, no claiming that it is a complex issue. The Oeko-Institut is happy to identify the first steps in the right direction.”

Sustainable consumption in Germany, Europe and worldwide is the main focus of Siddharth Prakash’s work. As Head of Subdivision in the Sustainable Products and Material Flows Division, his areas of expertise include product longevity and obsolescence, ecodesign and ecolabelling, and social and environmental standards in global value chains.

Series of articles in the Oeko-Institut blog: Circular Economy

Press release from the European Commission: Changing how we produce and consume: New Circular Economy Action Plan shows the way to a climate-neutral, competitive economy of empowered consumers

Questions and Answers on the European Commission website: A new circular economy action plan for a cleaner and more competitive Europe

The yoghurt in the fridge, the shampoo in the shower, the cheese on the dinner table all have one thing in common: they…

more
More than once

“A circular economy always works in times of scarcity”

What can be done to progress the circular economy? What advantages does it offer – not only for the environment and the…

more
“A circular economy always works in times of scarcity”