Issue: September 2022, A perfect circle – How does the circular economy work?

“A circular economy always works in times of scarcity” 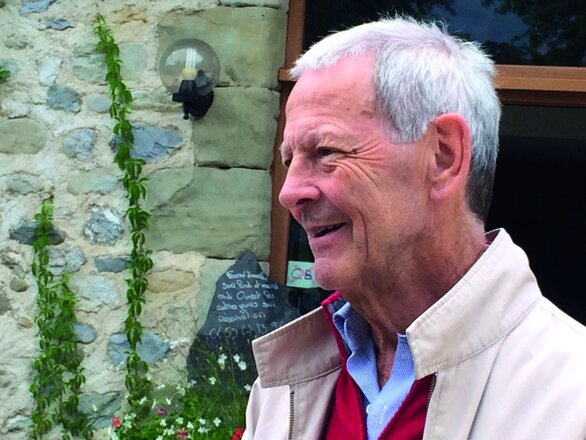 What can be done to progress the circular economy? What advantages does it offer – not only for the environment and the climate, but also for the economy? We discussed these questions with Walter R. Stahel. In 1982, he founded the Product-Life Institute in Geneva, which is dedicated to product-life extension of goods and components. Walter R. Stahel has also advised the European Commission in various capacities and is a member of the Club of Rome.

Mr Stahel, a circular economy is not an invention of our modern era. How long has this concept existed?

It has existed for centuries. The circular economy always works in times of scarcity. After the Second World War, for example, women sorted the rubble from bombed-out buildings so that it could be used to build something new. In many countries of the Global South, a circular economy is quite normal. I am thinking of the reuse of old oil drums in Nepal: they are turned into turbines or kitchen appliances, for example. It’s only in an affluent society that no one entertains these ideas.

Does this mean that we also need a period of scarcity for the circular economy to take off?

What is needed is either external compulsion or inner conviction. For example, what I am seeing among many young people here in Switzerland is a tendency to reduce and simplify consumption. There is certainly a shift of mindset here. But at the same time, we are also seeing that large segments of industry have no interest in rethinking their business models at present, even though doing so would be more beneficial for many companies than their current approach.

Manufacturers must learn that in a circular economy, they do not earn their money at the point of sale: they earn it through use. You can either sell a product or you can supply it to someone on a long-term basis and offer servicing and maintenance as well. In the former case, I earn money once; in the latter, I earn more money, but over a longer period. This requires a very different mindset. But there are already examples of this performance economy, as it is called, which show that this can work.

Public transport is just one example. Taking a taxi is equally a case in point. There are also companies that offer a specific product for use by the customer, such as garment and textiles leasing services that provide uniforms in civil aviation or linen for hotels.

What kind of strategy is needed to progress the circular economy?

The main problem is that we import most of our raw materials and the price we pay is far less than the real cost. If we were to provide decent working conditions in the mining industry, for example, or internalised environmental costs such as water pollution or soil erosion, raw materials would be so expensive that over-consumption would no longer be possible. Maintenance and repair would suddenly start to pay off. In general, taxes and charges are a key mechanism. There should be no more taxes on human labour. If it is cheaper to recondition existing goods than to produce new ones, manufacturers will be compelled to sell the use of the goods. And then it will worthwhile for them to ensure that products have a long lifespan and can be dismantled and repaired.

We also need to build products in a way which makes it easier to recover the raw materials they contain. A passenger car, for example, should not consist of countless different steel and aluminium alloys which cannot be properly separated in a simple shredder.

If you were the head of the government and had complete freedom to make any policy decision you liked, what would you decide in relation to the circular economy?

I would ensure that redundancy and resilience were built into all the country’s vital systems. They need to be able to function even if supplies of raw materials or energy from abroad were to cease for any reason. Of course, for a country like Switzerland, this is difficult, but it is feasible for Germany.

Talking to eco@work: Walter R. Stahel, Founder-Director of the Product-Life Institute in Geneva.

Walter R. Stahel is the Founder of the Product-Life Institute in Geneva, which is dedicated to product-life extension of goods and components. The Institute pursues this objective through applied scientific research and by providing consultancy to industrial companies, government authorities and universities. Walter R. Stahel has worked as an independent consultant and researcher for some 40 years. He focuses on technical and commercial innovations that can extend product usage times, as well as on regional economic development. Walter R. Stahel has also advised the European Commission in various capacities and is a member of the Club of Rome since 2012.

The yoghurt in the fridge, the shampoo in the shower, the cheese on the dinner table all have one thing in common: they…

more
More than once