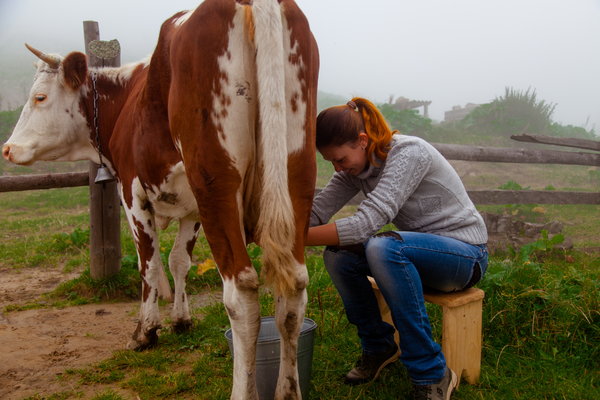 the organic milk scores in terms of its carbon footprint

From an environmental perspective, milk that is produced on organic farms is better than conventionally produced milk. The extensive avoidance of pesticides and mineral fertilisers in feed production results in a significantly lower burden on the environment by comparison with feed grown in conventional farming systems. Despite the lower yields and lower milk outputs in organic agriculture, the organic milk also scores no worse in terms of its carbon footprint. One reason for the more positive result is that organic farms feed less concentrate lactating-cow feed to boost milk yield.

These are the findings of a study by the Oeko-Institut, INFRAS and KTBL that is published today. The research, which was commissioned by the German Federal Environment Agency, explored the environmental footprint of different forms of milk production in Germany.

The analysis shows that how the animals are fed has a particularly major impact on the environmental footprint. In conventional milk production the provision of feed accounts for between 18 and 34 per cent of the total potential greenhouse gas emissions per kilo of milk; on organic farms the figure is between six and 20 per cent. If more domestically produced feed were to be used in the cowshed – such as field beans instead of soya imported from overseas – greenhouse gas emissions could be reduced.

In organic dairy farming, by contrast, direct emissions – especially methane emissions from the animals’ digestive processes – account for a larger proportion of the greenhouse gas potential per kilo of milk: in organic farming systems this figure is around 50 per cent, while on conventional farms it is only around 30 per cent. The reason is that in organic dairy farming the cows give less milk per unit of feed. However, this effect is offset by the extra emissions from the provision of feed in conventional systems.

The study also showed that milk production with grazing has some significant environmental benefits in the form of lower energy and water consumption per kilo of milk. There is also less pollution of water by substances such as nitrates and phosphorus (eutrophication) and less impact on soils as a result of the use of slurry and the associated ammonia loads (acidification).

“Overall, organic pasture-based milk production has benefits in terms of protecting the environment, and from the point of view of climate protection, too, it has no disadvantages,” is the verdict of Dr Jenny Teufel, the Oeko-Institut’s expert in sustainable food production. She points out: “Using domestically produced feed, allowing cattle to graze and using hay in the basic feed are important levers that farmers can use to minimise environmental impacts without compromising climate change mitigation efforts. Seeking to boost the average milk yield of cows on organic farms is not an appropriate means of reducing the environmental burden of milk production. The climate benefit is small and other pressures on the environment, such as land take and energy consumption, increase.”

“Hidden” costs are borne by society

The study is also the first to explore the potential costs of the damage that milk production does to the environment. These include, for example, the future costs of preventing greenhouse gas emissions or pesticide use, or the costs of remediating damage to the ecosystem.

“At present these costs are not included in the price of milk,” explains Teufel. “Nevertheless, they must at some point be paid by members of society.” The researcher stresses that it was not possible to take all environmental costs into account in the study. Issues that were not covered include the conservation of biodiversity and husbandry methods that prioritise animal welfare standards. According to the nutrition report published by the Federal Ministry of Food and Agriculture (BMEL) in 2019, this last aspect is important to more than 70 per cent of Germans.